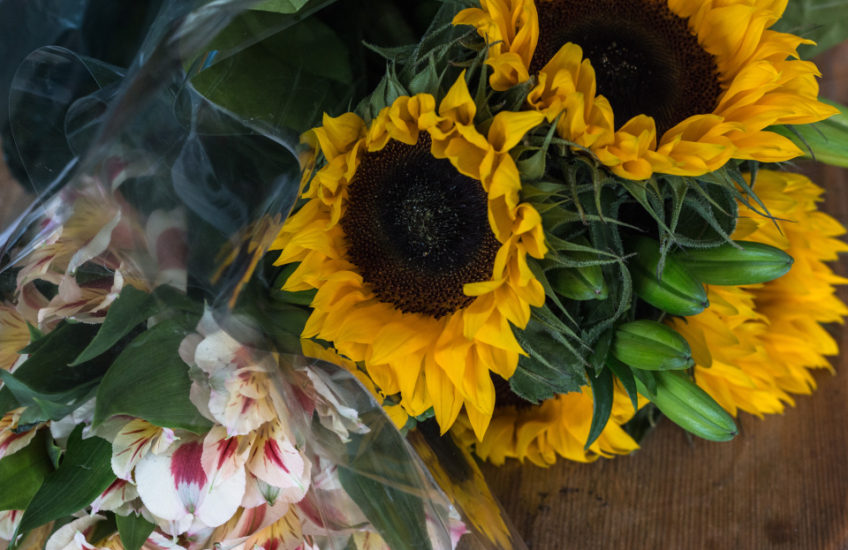 Because I’m worth it.

Although, if you could ask him, I doubt that this would be Arthur’s opinion.

We managed to get him to the vet at the appointed time this morning, though we didn’t make our lives any easier by deciding to combine this trip with me running R into Stratford to pick up his loan car – but as R has to be in Yorkshire for the next couple of days it made sense for him to be able to just collect the car and go straight off to the motorway. So my little VW was sitting low in the water when it set off with the two of us, Arthur in his crate in the boot space, and all R’s luggage including Child Two’s guitar. Roley was bribed with food to stay at home.

After dropping off Arthur (distressing) and signing the consent form (worrying), R and I went on to Stratford. We were held up at roadworks in the village of Mickleton, and found ourselves waiting for the temporary traffic lights to change outside a house with a trestle table set up on the drive, with buckets on it containing various flowers for sale, including a range of different sizes of sunflowers. I was very taken with some of these, but we couldn’t really make the traffic situation worse than it already was by me stopping to buy some. As we drove on and I was concentrating on negotiating a sharp bend, R spotted that the field next to the house was full of growing sunflowers, and he suggested that I could go back that way later and photograph them.

We got to Stratford, I dropped R at the car loan place, and then, I felt, I deserved a smackerel of something to take the edge off a stressful morning. I drove to a nearby shopping centre, had coffee and a muffin, and then on an impulse popped into M&S – where to no-one’s surprise they were selling sunflowers. “Meant to be,” I thought, and bought some, along with some stargazer lilies and alstroemeria.

As I was driving home I glanced down at them on the passenger seat and noticed how rich the colours were in the dim light inside the car – so as soon as I got home I plonked them down on the corner of the kitchen table, opened the back door to let in a little more light, and took a few shots. I uploaded, culled, edited (not much: a little extra exposure, some contrast and clarity, and the vibrance reduced enough to to bring the colours within a credible range), exported – and all before noon. Almost unheard of for me! But then I thought that I should wait until I could tell you how Arthur was doing, which is why I’m only blipping now.

I had to go back for him at 4pm, and though the vet told me that he’d come through the anaesthetic very well, he was clearly still pretty much out of it. When he’s excited or stressed he walks in circles, so all the time she and I were talking he was wandering in a wobbly fashion round and round the consulting table, crashing the Cone of Shame into it every few seconds.

He has a large sutured wound on his chest, because the lab had suggested on biopsy of the lump that a sizeable area around it should be excised too; and a much smaller one on his face where the vet had used the opportunity and the permission I’d given her to take off a mole that was growing close to his eye. He has to go back on Friday for a post-operative check, and the stitches will be in for a fortnight – during which time we’re supposed to stop him from exerting himself.

Then came the problem of getting him home. We own two sizes of dog crate, but only the smaller one will fit in my car – and getting him in and out of it isn’t all that easy even when he’s his normal self, and even when he’s not wearing a Cone of Shame. As I contemplated lifting him over the edge of the tailgate, while trying not to put any pressure on his wound, and levering him backwards into the crate so that his cone didn’t catch in the doorway, I just thought “No.”

So instead I made like a fork-lift truck, lifted him with both my arms under his belly and put him in the front passenger well. I managed to persuade him to lie down, and we set off. He stayed lying down all the way up Broadway High Street, and then sat up – and passed the remaining fifteen minutes of the journey home gazing at me with much the same expression of reproach as I would imagine Marie Antoinette bestowed on the tumbrel driver. Every time we went (slowly) round a corner he fell over and breathed heavily, then levered himself back upright while I winced. It was a huge relief to pull into the drive and be able to check that he hadn’t split the sutures.

Back in the house he accepted a liver treat and went to his bed, from where he stared at me with extreme disfavour. I made him some scrambled eggs, which he graciously accepted, and then he went back to bed and went to sleep. When I came upstairs to write this he was snoring.

Roley, meanwhile, is extremely unimpressed with the turn his life has taken. Everyone except him got to go out enjoying themselves this morning, and when Arthur came back he got a ton of scrambled eggs while poor Roley only got a spoonful. And now Arthur is asleep, and Woman is upstairs, and Roley can’t go upstairs because he has Horrid Habits (allegedly) and if he sneaks up he gets shouted at. And though Man allows Roley to keep him company in his study, Man hasn’t come home. Where is Man? Why has he left poor Roley with useless Arthur and unkind Woman?

He made so much fuss, left in the family room with Arthur, that in the end I opened the door and let him into R’s study, where he’s lying in a dark corner – cold, hungry, alone and unloved, like Oliver Twist in the workhouse. Poor Roley…..

Having posted this I shall go and find out if Arthur thinks he might like to go for a short totter, and then I think I will be having a glass of wine, followed by an early night!