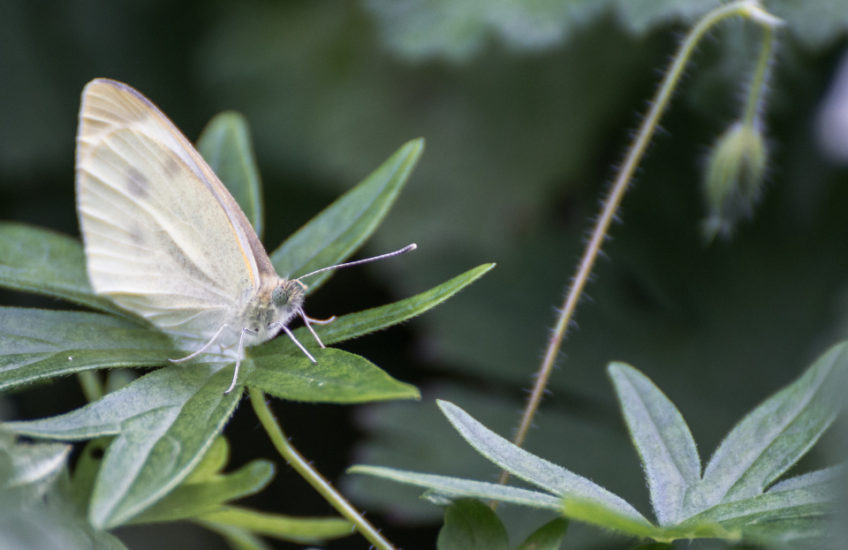 Apologies that this isn’t more inspired, but I didn’t take many photos today, and all of them were of white butterflies. These seemed to be the only things flying, on a blustery day of sunshine and showers.

I think this is a Small White, because the spots you can see are all showing through from the upper side of the wing, and it looks as though the dark mark on the edge of the forewing doesn’t extend very far. But I could be wrong – it might just be a Large White. Both the small and large species are also referred to as Cabbage Whites, from their preference for laying their eggs on brassica plants.

Luckily for me, I don’t have any brassicas – nor nasturtiums, which they also like. This one is resting on a Geranium sanguineum leaf, where it stayed for several minutes.

I spent most of today mooching about the house, trying to catch up on a backlog of editing while keeping an eye on Arthur. He’s been much brighter in himself – eating voraciously, and accepting walks when they were offered – though the wound on his chest must surely be uncomfortable. It has bled a little from the very end of the incision, so I’ve had to bathe it with saline, but the sutures look OK so far. I’m not looking forward to having to get him back to the vet’s in the morning, but I daresay I’ll contrive some way of containing him for the journey.

Thank you for all the good wishes you’ve bestowed on us over the past couple of days.

Oh, and also: thank you for your lovely response to Tuesday’s honey bee, which made it to page two of Pops – to my very surprised satisfaction. Paladian has queried my tentative identification of the mystery bug as a sawfly, and has suggested that it might actually be a small wasp or solitary bee – so I’ll have to do some more work on that one!