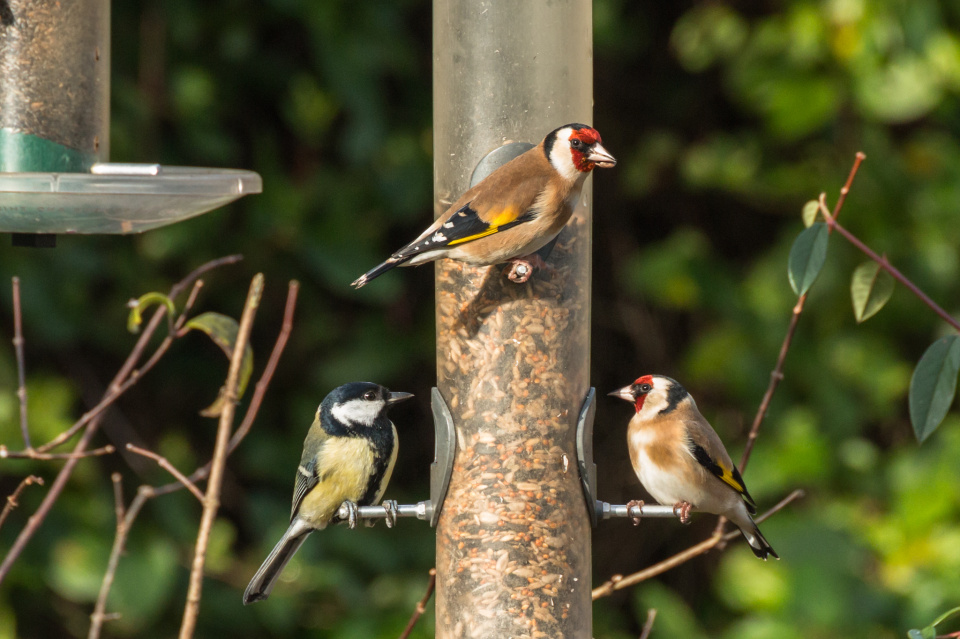 I had to go to the doctor’s surgery this morning, for a steroid injection in my troublesome shoulder. I’ve been a little concerned about it, having heard various unpleasant stories, but the procedure went very smoothly – the most difficult part of the whole experience was finding one of my earrings, which was pulled out when I took off my jumper and attempted to hide itself under an equipment trolley.

The GP warned me not to do anything strenuous with my right arm for the rest of the day, so I only took 152 photos, with a a 300mm lens. I did start to become aware of the shoulder after the first dozen or so, but luckily it was sunny in the garden (though chilly), so I sat down in a patio chair and with my elbows on the arm rests I was able to support the camera with much less effort.

Goldfinches have been visiting our garden for several years now. For a long time they were picky eaters, declining everything but the nyger seed in the small feeder on the left of this shot, but they’ve recently decided that they like the contents of the general seed feeder too. This is a mixed blessing, because they’re extremely messy eaters – half of each seed they take, and anything they don’t much care for, is simply thrown to the ground. This feeding station is in the middle of a flower bed, and the ground feeding birds which clear up the spill under some of our other feeders don’t like to eat where they can’t easily see if a predator is approaching – so the spillage here is largely left, and quite a lot of it germinates. A few days ago I cleared an enormous mat of weed and seed from underneath this feeder, and I foresee that I’ll be doing it again pretty soon. We used to have a plastic tray which screwed to the base of the feeder to catch the spill, but it didn’t last long – the squirrels thought it was a dining chair, and after a while it cracked under the weight it kept having to support.

Despite the irritation of having to clean up after them, and the cost of the quantity of seed they get through, I do like to see goldfinches – and the great tit which photobombed this shoot. During the quarter hour or so that I sat on the patio with my camera I also saw a long-tailed tit, several blue tits, a couple of house sparrows, a coal tit, a greenfinch and a female blackcap – only the second time I’ve ever seen a blackcap in this garden. There were some larger birds waiting in the wings – jackdaws, woodpigeons and collared doves – but they and the squirrels weren’t prepared to come to the feeders when I was so close, so the smaller birds had the feeding stations to themselves.

I used the 70D for this set of shots because of the extra reach of the crop sensor, but the focus isn’t as sharp as I would like, and the shots I took on the shady side of the garden are so grainy from the high ISO that they look as though they were taken through gauze. The 5D would have made a much better job of all today’s photos, for which reason the 400mm prime I’ve been wondering about is moving up the wish list. Time to start saving up again!