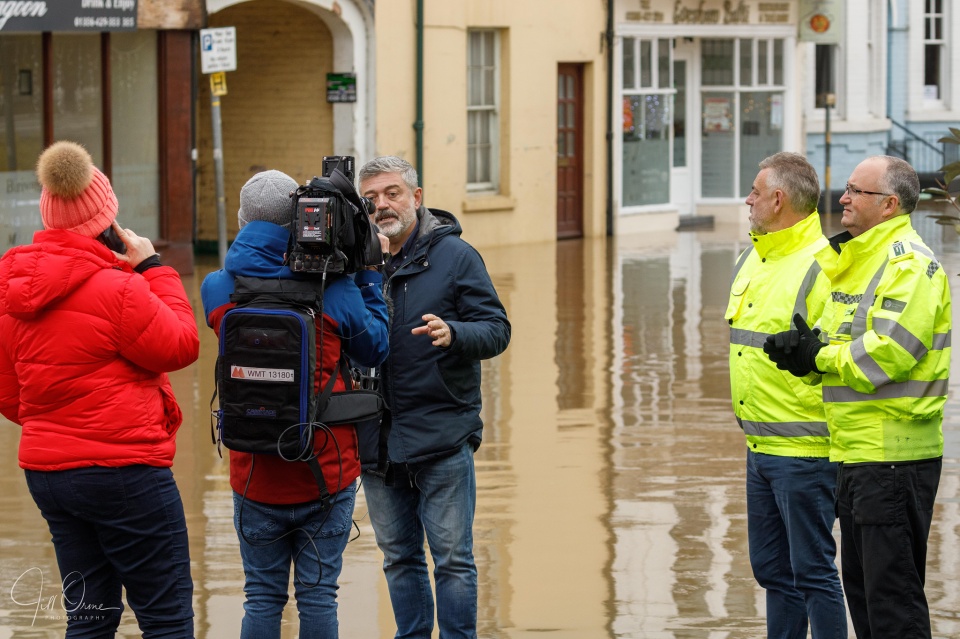 I believe I’m right in saying that this is only the third time that Evesham has become the centre of the world’s attention since the Battle of Evesham* in 1265.

This area has flooded several times before during the quarter century we’ve lived in the Shire, the worst times being in 1998 and 2007. If today had come anywhere near those events R and I wouldn’t have been able to get to Evesham at all, and this film crew wouldn’t have been able to do their report at the junction of Port Street and Waterside unless they were all equipped with fishing waders. Overnight our neighbours’ pump cleared the lane through our village, and we were able to get out of the trench with no difficulty, though we still had to pick our route to Evesham quite carefully to avoid some flooded roads; but the flooding was more patchy and localised than in the two notorious years, and the town itself was fully open for business.

If you’re interested, I’ve posted a set of photos to my Facebook page, most of which were taken in Abbey Park. The labrador was out with his owner for for his normal run, and was absolutely thrilled to find that chasing his ball now involved swimming; I was less thrilled by the fact that he shook himself every time he brought the ball to land, but I endured long enough to have a chat with the owner, who told me that his flooding benchmark is the bandstand – today it was in the water, but in 2007 only the roof was visible. He also told me that some friends of his owned one of the waterfront properties at the time, and that their first-floor sitting room was under water, after a boat broke the patio doors; I remember the news footage of people being rescued from those properties by helicopter.

Our own experience of those floods involved R driving in decreasing circles around the county, trying to reach and rescue Child One and her then-boyfriend, who’d been travelling back from Staffordshire on a train that became stranded by a landslip at Droitwich, at which point they were turfed out into the town (in inappropriate clothing) to fend for themselves; and me making two trips into Evesham, the first to collect Child Two when we received a phone call to say that all the schools were closing, and the second, an hour later, to fetch the bag of books he rather belatedly realised he’d left behind. Having finally assembled everyone and their belongings, we then sat in the house and watched the water rising, hoping that that it would find a run-off before moving in with us, and being hugely relieved when the advance slowed and then stopped. Many other people weren’t so lucky.

Since then all kinds of flood alleviation work has been done – which may be why this event has been so much less dramatic than the last one – but it’s hard to see how any town could ever be fully flood-proofed when it sits alongside a major watercourse. Perhaps that’s what the chaps from the Environment Agency were getting ready to say when they were interviewed – though I didn’t wait to find out because I had an appointment with a cup of coffee and some cake.

*The Battle of Evesham is celebrated round here as the tragic defeat of a brave man who was trying to establish a Parliamentary democracy, in opposition to a tyrannical king. The truth is that local hero Simon de Montfort, after whom everything in Evesham is named, was a thuggish chancer who fell out with his brother-in-law King Henry III primarily over money, and who was responsible for massacres of Jewish people in several large cities, seizure of their property, and cancellation of all debts owed to them. During the year in which he had effective control of the country, having defeated Henry at the Battle of Lewes, it’s true that he increased the number of representatives elected to sit in Parliament, including ordinary (rich) people as well as nobles – but I’d take a guess that this had more to do with raising money for his government than noble democratic principle. Whatever, he managed to fall out with most of the barons who’d supported him thus far, and when the Prince of Wales escaped from de Montfort’s custody and raised an army, it didn’t take him long to trap de Montfort’s smaller force at Evesham and massacre it. Bits of de Montfort were distributed around the country pour encourager les autres, but part of him is allegedly buried somewhere in the remains of Evesham Abbey.