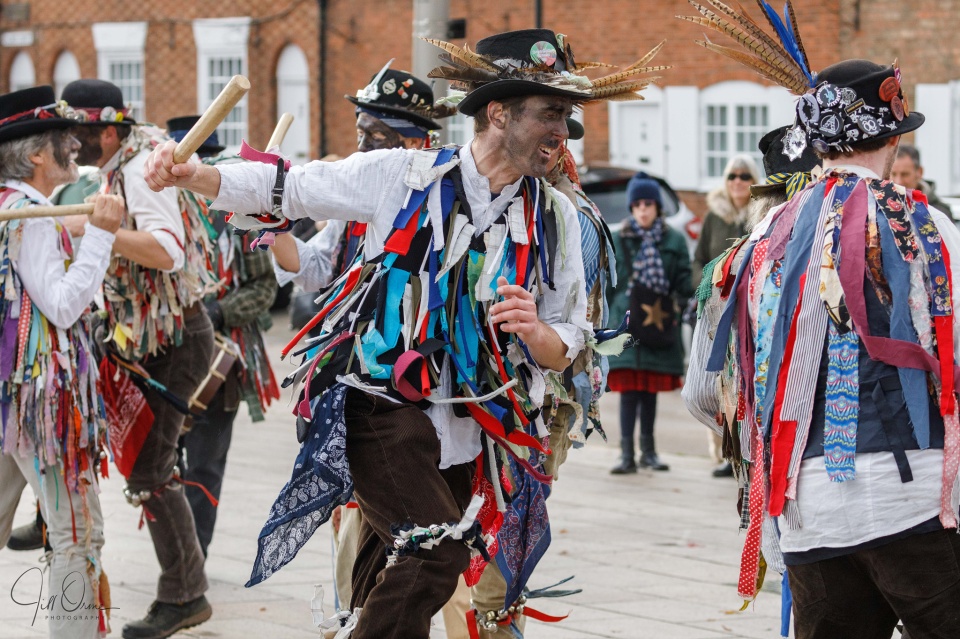 In my childhood, morris was performed politely by men in cricket whites and bowler hats, and I always found it jaw-clenchingly embarrassing. Since then it has gone back to its anarchic folk roots, and I think it’s the better for that – though I wish they’d give up the black-face, which I know is not intended to give offence, but does to a lot of people. I’ve seen it defended as traditional, to which my answer would be: so were bear-baiting and public executions at one time, but most of us have moved on from thinking they’re acceptable now. Some people say that soot was originally used to disguise the performers, public dancing having been outlawed, along with all other means of having fun, by the Puritan authorities in the C17th, but again – we’ve moved on. I think there may be different shades of opinion on this question within this morris side, actually – there were certainly different shades of makeup, from heavy black, through grey, via commando-style camouflage streaks, to none at all.

Setting that aside, Alvechurch Morris were pretty entertaining, and certainly seemed to be having a good time themselves as they performed in the Bancroft Gardens in Stratford this lunch time. The reactions of the audience ranged from amusement to bemusement, but at least no-one seemed to have their jaw clenched. 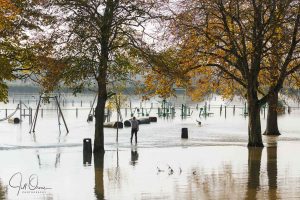 My extra shows the flooding at Bidford-on-Avon, where the bridge was open today, but only just – there’s still water over the road on the south side, though it’s now shallow enough to be passable with care. As we approached the bridge on our way to Stratford the traffic light turned red, and when R stopped the car I got out and walked over, stopping in one of the refuges to get some shots. I have photos of the river itself, but I liked this one of outdoor gym area in Big Meadow, on the south side of the river, because I think it gives a sense of how far the Avon is out of its normal bounds.