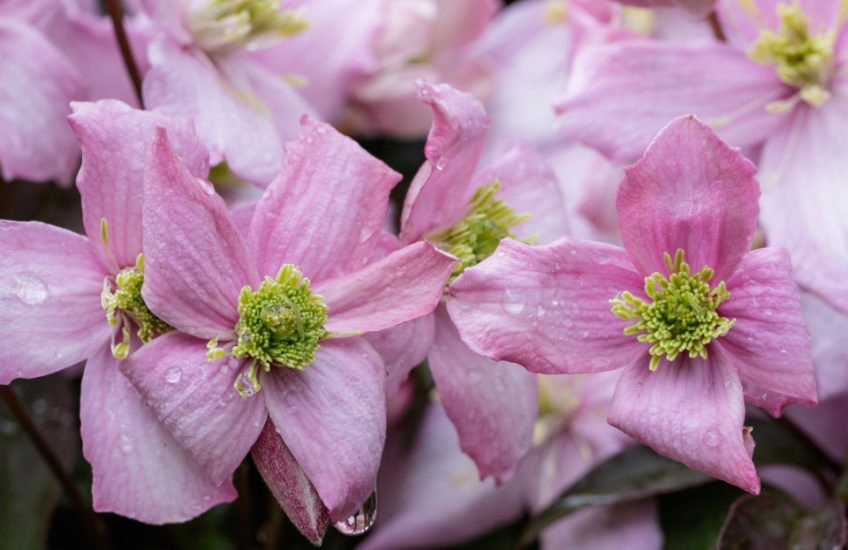 It was cold and wet for most of today, but I consoled myself that the garden needed the rain after the dry spring we’ve had. I spent several hours processing photos, and only went out with the camera for about half an hour at lunch time when the sky cleared and the sun came out – though sadly that didn’t last, and by the time I took this the light was going again. So, apologies that it’s another Annual Blip (yesterday Hall’s Croft; today wet clematis) – I’ll try to raise my game just as soon as I clear the editing backlog.

I do have to say that this Clematis montana rubra ‘Elizabeth’ is one of my better plantings; it lives in the corner of the front garden, where it can both spill over the front wall and twine along the fence that divides us from our neighbours. It’s very vigorous, and keeps trying to throttle every other shrub in the side border – but you can’t have everything. At this time of year it looks glorious – and I particularly like it in murky light like today’s.

This evening R and I went to see Their Finest, which is a rather slight piece about the making of a morale-boosting film during World War II, but which has some nice (hammy) comedy turns from Bill Nighy, Richard E. Grant and Jeremy Irons. Gemma Arterton plays the heroine very appealingly, opposite someone called Sam Claflin whom I’m far too old to have even heard of. It didn’t shake my world, but I enjoyed it.