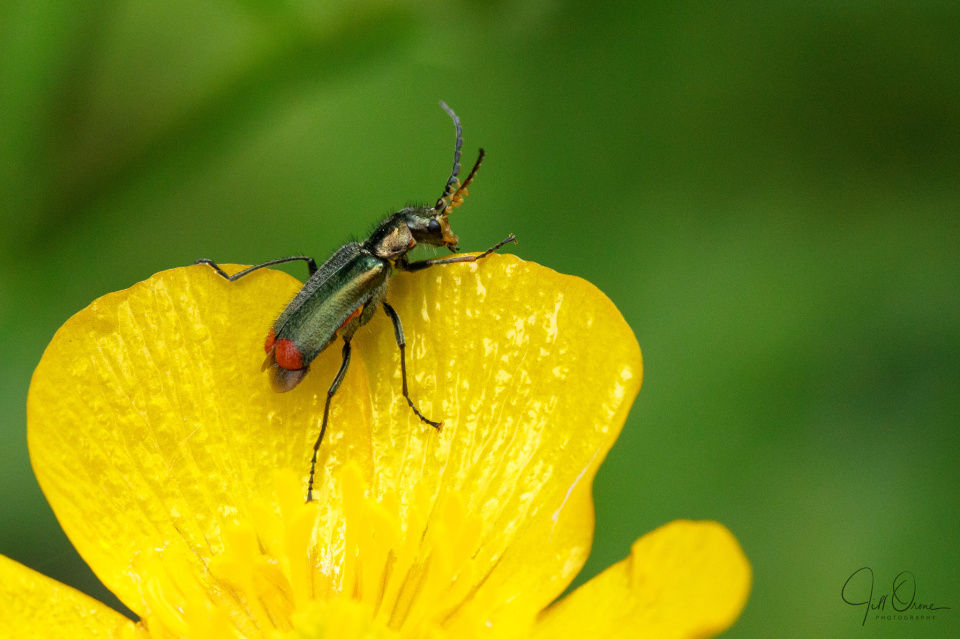 The garden is currently full of buttercups, which are a wonderful resource for a number of invertebrates, so every time I walk down the garden I check all the buttercup flowers to see who might be lurking inside. Today’s discovery – quite common, but a first record for the garden – was this malachite beetle. He wasn’t happy about me looming over him, so I had to get my shot quickly, because this is a species that will take flight very readily when it’s disturbed. It also has a defence mechanism that it uses on potential predators (though happily not on me): the red structure you can just see protruding below the side of the wing case is one of a pair of sacs called cocardes, from which the beetle produces a noxious smell when it’s alarmed.

Male and female malachite beetles can be distinguished by the yellow markings on the face, which are much more extensive in the male, and perhaps more easily by the antennae, which are unremarkable in females, but in males have odd-looking yellow lobes on segments two to four, as you can see here. Males produce a sex pheromone in a gland on the head, between the antennae, which they transfer to these yellow lobes, and present to a female during courtship by holding the antennae forwards. Females find the pheromone irresistible and will eat it during a protracted foreplay ritual, though sadly for the males this doesn’t always lead to copulation: each female beetle will mate only once, but they’ll still take the pheromone whenever it’s offered to them. (*Insert your own social commentary here.*)

Females lay their eggs in bark crevices and clumps of vegetation. The larvae are agile and predatory, and quite distinctive in appearance. They undergo complete metamorphosis, pupating over the winter. Adults, which are about 6mm in length, emerge in April and May, and can live through to the late summer, feeding on a combination of pollen, nectar, and other small invertebrates.