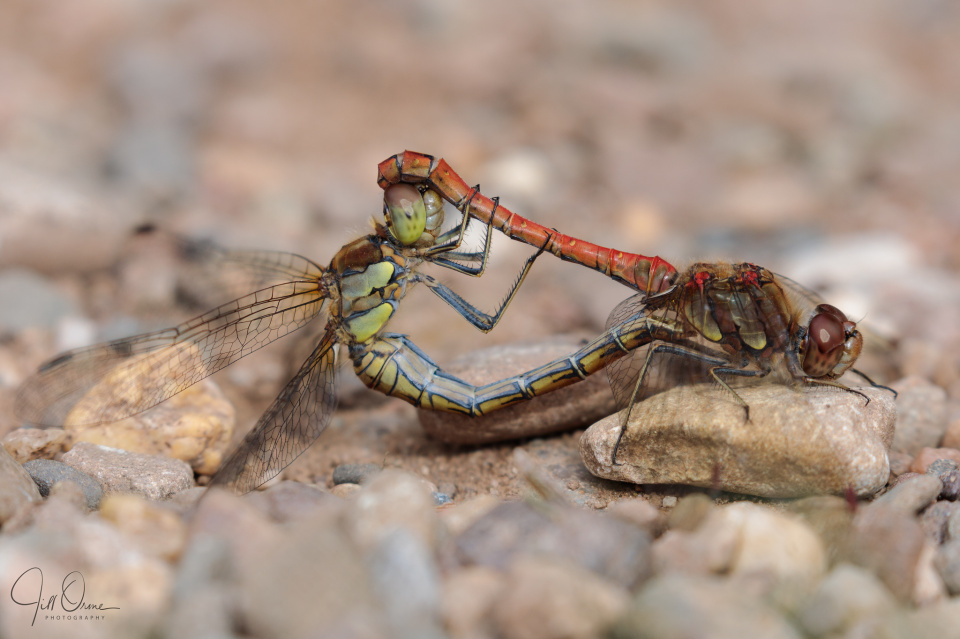 I left home this morning in warm sunshine, but by the time I reached Croome the temperature had dropped and the light was Stygian, and as I was walking through the shrubbery towards the lake it began to rain. I reconciled myself to it being a zero-Odonata day (0donata, ©), and set about taking consolation photos of flowers, and other odds and ends such as some bonking beetles, and (distantly) one of the estate’s resident herons.

By the time I reached the island at the far end of the lake it was raining fairly hard, so I settled myself on a fallen tree trunk under the canopy of a large chestnut tree and did social media on my phone until the rain stopped and the sky cleared. As the sun emerged, so did the dragons, and in astonishing numbers, given how few I saw at Croome on my two visits last week. Hungry and looking for love, they were all zooming around in a way that made even the normally placid Migrant Hawkers quite difficult to photograph – but to a committed dragon fancier that kind of challenge just adds to the fun.

It’s only about three weeks since I last posted a photo of Common Darters in cop, but having made a spectacle of myself getting this image there was no way I wasn’t going to blip it. The male (on the right here) picked up his paramour over a reed bed and removed her to the path between the two metal bridges, just in front of the Island Pavilion. I managed to stalk them to within macro range, but this was taken with the long lens, right at its minimum focus distance. Shooting a very small subject with a lot of lens from very close range gives excellent background separation but makes the focal plane wafer thin, so I could only get both heads and both abdomens sharp by lying prone on the grass (expressing thanks over my shoulder to people who came over the nearer bridge, assessed the situation, and detoured round behind me so as not to spoil the shot).

The most interesting thing I saw during my visit wasn’t the most photogenic, but I’ve put one image onto Facebook if you’d care to see it. Brooks and Cham say of the Migrant Hawker: “The female usually oviposits alone, although tandem oviposition has been recorded.” Which I can confirm, because I saw it happen twice today. Neither female looked thrilled about the situation (as I said the other day, they tend to be secretive when ovipositing), and the one in my Facebook photo was especially reluctant: every few seconds she would shake herself vigorously and twist her head around, trying to get her partner to release her. But both males were implacable, and maintained their grip – the reason, I think, being the high number of rival males who were close by at the time, waiting for a chance to supplant them.

You probably know, because it’s one of those fun facts that turns up in programmes and articles about dragonflies, that if a male can catch a female that was recently mated, he’s able to ream out the sperm of his predecessor from her genital cleft, and replace it with his own. So when the air is thick with males, and females are in short supply, the successful male needs to protect his reproductive investment, by preventing any rival from taking his place before the eggs he has fertilised have been laid. In some species the male will perch nearby or fly around the female as she oviposits, guarding her and chasing away competitors, but for those that can, the most certain way for a male to ensure that the female lays his eggs is to keep hold of her while she does it.