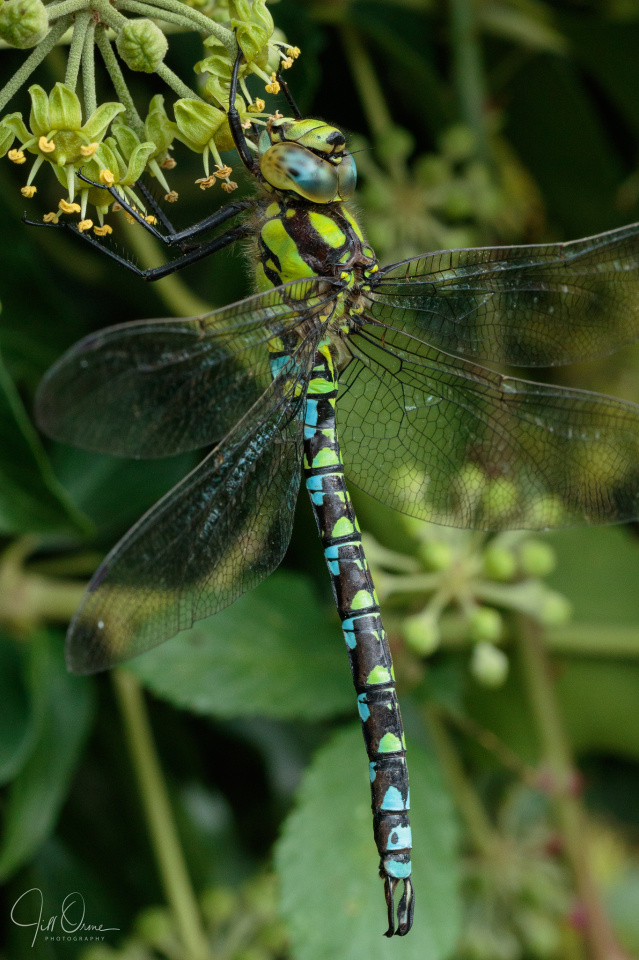 Seeing this Southern Hawker in a close-up image, ‘camouflage’ may not have been the first word that came to your mind, but I promise you that those blue and green markings were remarkably effective in allowing him to blend in with the background. Admittedly, my eyesight isn’t what it was, but I knew where he was, I had my glasses on, and I still nearly missed him.

About an hour earlier I had missed one – a female Migrant Hawker this time – which I’d spent an enjoyable quarter hour watching as she hunted around Tilly’s field. She wasn’t fully mature, so every now and then she needed to rest, and I was very much hoping to catch her perched. I managed it once when she landed on a stiff stalk in the long grass, but I was quite a way away and the photo was more atmospheric than it was impressive. The next time she landed, she chose a blackthorn hedge at the top of the meadow, and although I was too far away to see exactly where she came down I knew the rough area, so I set off towards the spot, walking slowly and looking carefully. I searched and searched, and had just decided that I’d been wrong about her having landed at all, when a rustle of wings just above my right ear told me that she’d taken off again.

I stomped home for a cup of tea and a good old moan to R, and then went off out again to see what else I could find around the village. On my way home I was checking this ivy hedge for hoverflies and ivy bees when I saw this Hawker hunting a little way in front of me. I was quite close to where he landed, but a curve in the hedge made it difficult to pinpoint him, so I walked away and then slowly back in an arc, giving him plenty of warning of my approach in the hope that he wouldn’t startle. Arriving at what I thought was the right place I stopped about a metre back from the hedge, and looked… and looked… and looked… and saw…. nothing.

For once the wind worked in my favour (as well it might – it definitely owes me a few). Just as I was on the point of giving up, a gust caught him and swung his abdomen sideways, and as he worked to hold on to his perch, his wings vibrated, rustled, and caught the light. He was a very small step to my left, at about chin height, and my eyes must have slid over him several times without registering him at all.

A few weeks ago, when the weather was good and we began to get Southern Hawkers in the wild garden, R and I noticed that they seemed to prefer to hunt in the dappled shade under the trees, rather than in the brightly lit centre of the garden. Over the season, having spent a number of hours watching them in flight, I’ve come to wonder if this preference is linked to the fact that their markings render them almost invisible against dark foliage, and give them an even greater advantage over their prospective prey. In which case, I wonder which came first: the dappled markings, or the instinct to hunt in patchy light. Either way (or both), evolution is astonishing.