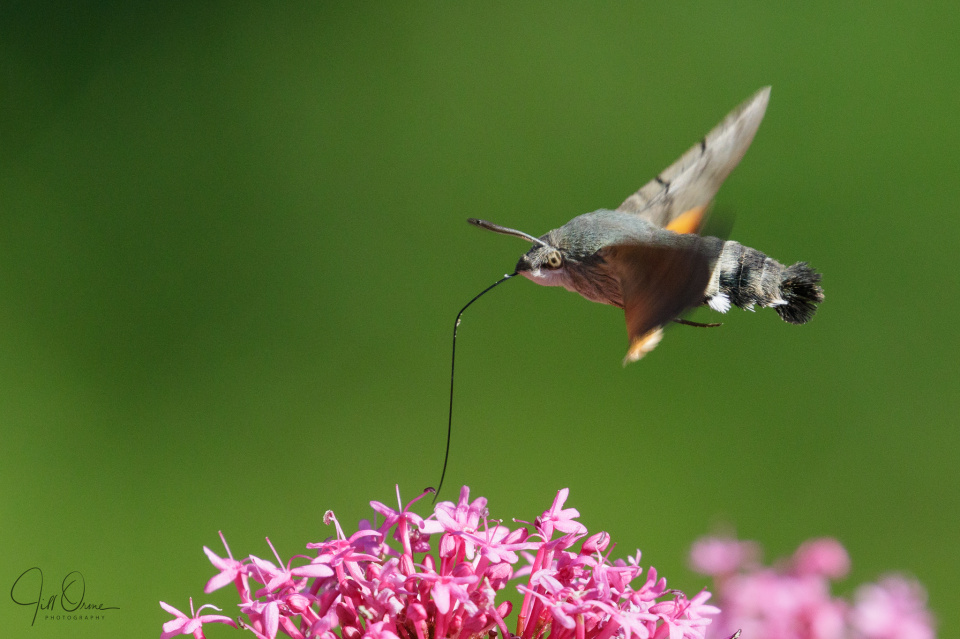 I love Hummingbird Hawkmoths. I also hate them, because the little darlings are so difficult to photograph. Honestly, they make dragons look easy.

We generally get a few visits from them each year, usually in late August or September, so I’ve been watching their favourite flowers quite carefully over the past few weeks. About a fortnight ago I spotted one buzzing round the garden wall when R and I arrived home from an after-dinner walk, but it was already dusk and I had no chance of getting a photo. I hadn’t seen one since, till I wandered into the front garden this morning en route to Tilly’s field, and caught sight of the tell-tale fast and erratic movement pattern. I had the macro in my hand at the time, but it soon became clear that the moth had no intention of letting me get close, and I knew that if I pushed my luck it would simply leave.

“WAAAH!!!” I wailed at R, who was doing something useful with secateurs at the time. “Is the front door open? I need a long lens!” Being a man who recognises a Hummingbird Hawkmoth crisis when it’s sobbing in front of him, he went and checked the door while I continued to track the moth, and finding that it was shut, walked round to the kitchen and through the house, opened it, and presented me with my big gear.

Ten minutes, 330 frames, and quite a lot of fluent Anglo-Saxon later, the moth had dipped every flower that was to its liking, and went off to work someone else’s garden, leaving me almost on my knees. I doubted that I had more than a handful of keepers – and I was right – but I was relieved to be able to give up chasing it around and go inside for a cup of tea and a sit-down. As I was tottering up the drive on jelly legs, our next-door neighbour’s adult son intercepted me and told me about an amazing insect he’d seen, “like a cross between a butterfly and a hummingbird”, feeding from a fuchsia in her garden. I laughed at the excellent description, and explained what he’d been watching – pleased to realise that someone else sees me as The Insect Lady.

One day I’ll manage a Hummingbird Hawkmoth photo that I’m entirely happy with – or maybe I won’t – but for today I’m moderately happy with this. I’d like to thank my husband for his tolerant assistance, and the auto-focusing system on the 5DIV for managing to lock on to a tiny subject that never stayed in one place for more than a split second. It’s entirely possible that I don’t deserve either of them.

I’d love you to look at this full-screen, if you have the time.