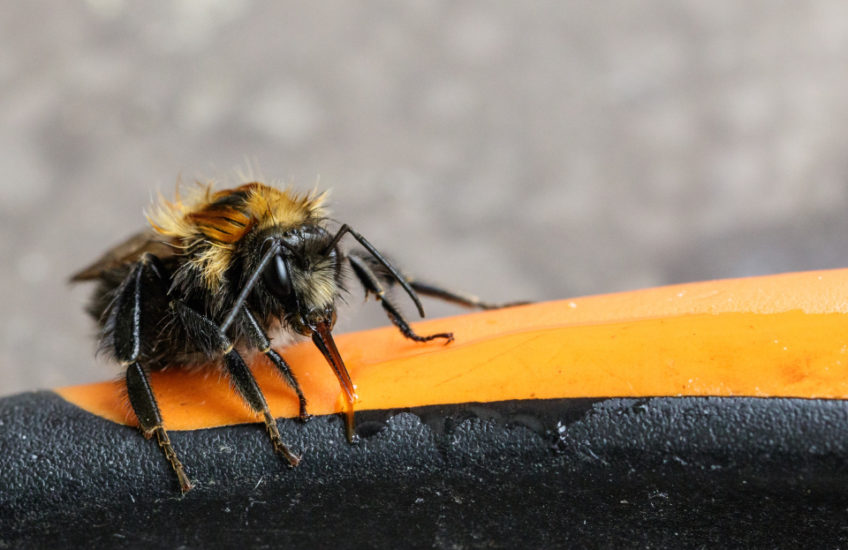 Polling day. Urgh – don’t get me started. I have almost exactly the same sensation in the pit of my stomach that I had on Referendum Day – but at least I’ve learned one lesson from that, and I don’t plan on staying up for the counts.

It was, naturally, cold, windy and raining this morning (traditionally beneficial conditions for the Tories). I thought I was going to have to break out the light pad again, so I squelched off around the garden, looking for a suitable subject. I found some woody nightshade and a rather pretty sprig of pink toadflax, brought them into the kitchen and popped them in the fridge to keep fresh, and then went out again to see if I could find anything better.

I was literally rummaging in the front border when I realised that I was in danger of squashing a small bumblebee that had got itself tangled inside a mass of wet yarrow stems. It was so wet and bedraggled that I couldn’t identify it, and I wasn’t sure whether it could or would sting, so I carefully edged one arm of my secateurs underneath it and tried to lift it clear of the plant. For several minutes the attempt seemed doomed to failure – every time I thought I had it, it slid off back into the yarrow – but eventually I managed to get it clear.

I tried to put it on the garden wall to sit and dry out, but by now all it could achieve was clinging to the secateurs – its head and antennae were drooping, and it was clearly completely exhausted. So I brought it into the porch, which is open on three sides but at least partially sheltered, and put the secateurs down on a bird food bin that lives there; and then I went to the kitchen and made a teaspoonful of sugar solution. When I first offered this to the bee – which I could now see was a male Bombus hypnorum (and being male, not able to sting) – he displayed no interest at all; it was only a couple of minutes after I’d dropped some of the sugar water onto the secateurs that his head lifted and he began to explore the surface in front of him with his proboscis.

As soon as I was confident that he was drinking I went and fetched the camera and macro, and I was rewarded with a pleasing set of shots of his recovery, which I’ve put on Facebook if you’re interested. This one was taken well on in the process, after he’d tipped himself off the handle to clear up some spillage from the lid of the bin, and then laboriously climbed back up again. I’m especially happy with it because it’s very well-focused on his eyes (I’ve caught the eye facets of other insects before today, but never a bee), and because it shows him alert and recovering. The photos cover a span of about twelve minutes, so I suppose that the entire rescue took about half an hour; if I’d realised that he was going to be with me for that long I’d have fetched the tripod and tried to get some stackable sets of shots, but as it was all the photos were taken hand-held.

About five minutes after I took this shot he started trying to fly. At first this was horrible to watch because he kept falling down and crashing into things, but after falling off the lid of the bin onto the base of one of the pillars that supports the porch he managed a short flight onto the ground. After resting for a few seconds (and apparently looking back at me) he took off again – a little wonkily at first, but then gathering speed and height – and the last I saw of him he was flying round the corner of the house towards the back garden.

I’d like to be able to tell you that he dipped his wings in salute as he went, but that would be a lie. I didn’t need thanks though – I was ridiculously pleased with myself, and really rather emotional: I know it was just a bee, but a day on which you can say you saved a life surely counts as a Good Day.