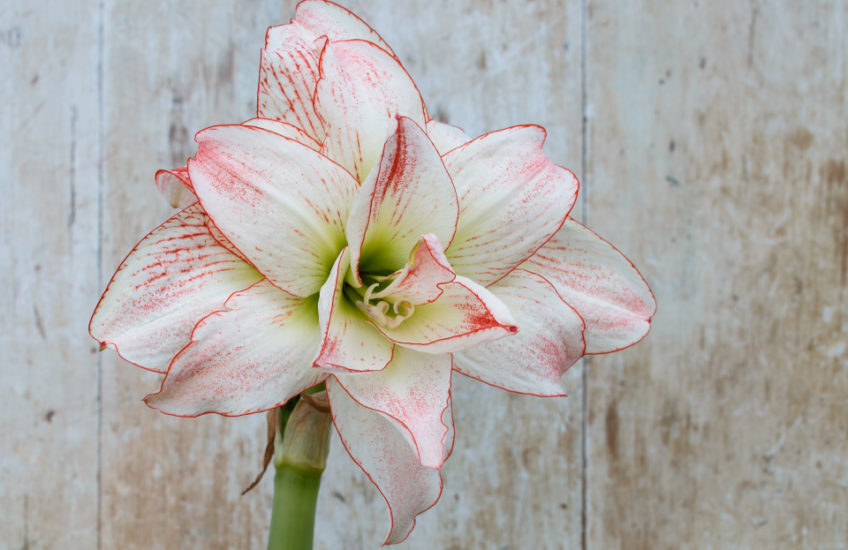 I bought this amaryllis two and a half years ago. It flowered one month later, in January 2015, after which I followed the instructions to cut off the dead flower head and then leave it alone until the leaves also died back; when that happened you were supposed to cut the leaves away too, and then put the bulb in a cool dark place for a few months to rest, before bringing it back into the light and recommencing watering.

I waited. And waited. But the leaves stubbornly refused to die back – in fact they kept growing to quite ridiculous lengths (almost a metre in some cases), and each time one of them bent over under its own weight and then wilted, another one promptly appeared to take its place. So instead of being put in a dark place and left to go dormant, the amaryllis has stayed in the conservatory for over two years – perilously underwatered, as are all my house plants, but hanging on in there. I wondered on more than one occasion about getting rid of it, but I’m loath to compost plants that look perfectly happy, so it was always reprieved and left to get on with its rather strange life.

A few weeks ago during a general house tidy and plant reshuffle, I moved it to the snug windowsill, where its giant bendy leaves have been causing R irritation ever since. And then last week I realised that the newest leaf was in fact a stem, complete with buds. Yesterday the first bud began to open, and today I walked into the room and found this: quite a surprise actually, because twenty nine months is more than long enough for me to have forgotten that the petals are picotee edged.

A nice surprise though – I really rather like it, and I’m pleased that I never got round to throwing it out.