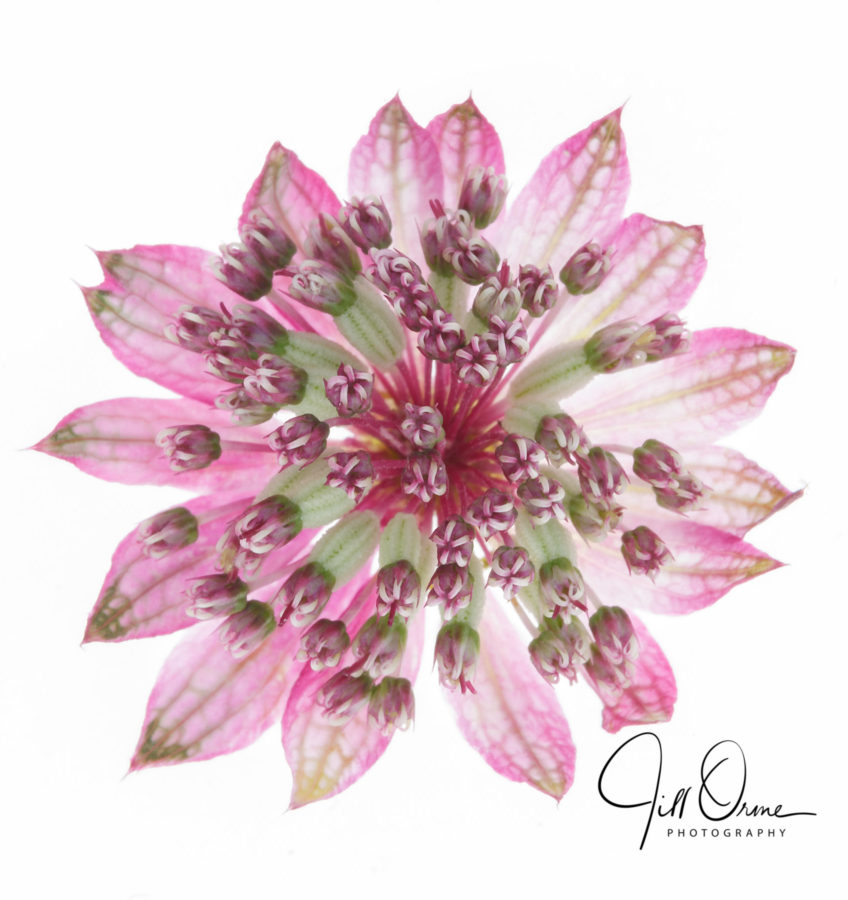 Last week I posted a selective-focus shot of my Astrantia ‘Star of Beauty’, and wondered aloud what it might look like photographed on the light pad. Today it rained so hard for most of the day that the roof of the Money Pit wasn’t up to dealing with all the water (we’re going to have to live with a drip-catching bowl in the upstairs back corridor until the roofers can get to us and fix it); so outdoor photography wasn’t high on my to-do list, and I thought I’d revisit the astrantia question and resolve it. Unusually for me, I find that I prefer the shallow depth of field shot to this one, though this is interesting.

For those of you who care about the technicalities, this was taken at +3 stops, but I had to pull the exposure back in processing – I think that +2.3 would probably have been about right for this image. Because it’s a tiny flower head I had the macro lens quite close to it, which of course decreases dof, and I almost went with an f/32 shot to compensate – but the diffraction caused just a bit too much softening for me to really like it. This was taken at f/22, but it lacks sharpness from front to back, and I now wish I’d focus-stacked it.

What this image does do is to point up how intricate the structure of this flower head is: each of those blobby things is an individual flower, sitting above a pale green ovary; the red petal-like things at the base of the flower head are actually bracts, or modified leaves. There’s a really interesting  description of an Astrantia major, with some beautiful photographs, here.

This evening I went out to the BGCC AGM and awards thingy, and came back with three trophies and a heap of certificates, plus a seat on the Committee for next year. I’m delighted to have had such a successful first year in the club, and I feel a bit foolish at having been so scared of joining – if you’re thinking about doing it, be guided by me, and cast aside that fear! In less positive news, I’ve now been booted up into the Big Boys’ Class where there are a number of very skilled photographers, so I confidently look forward to never winning anything ever again.