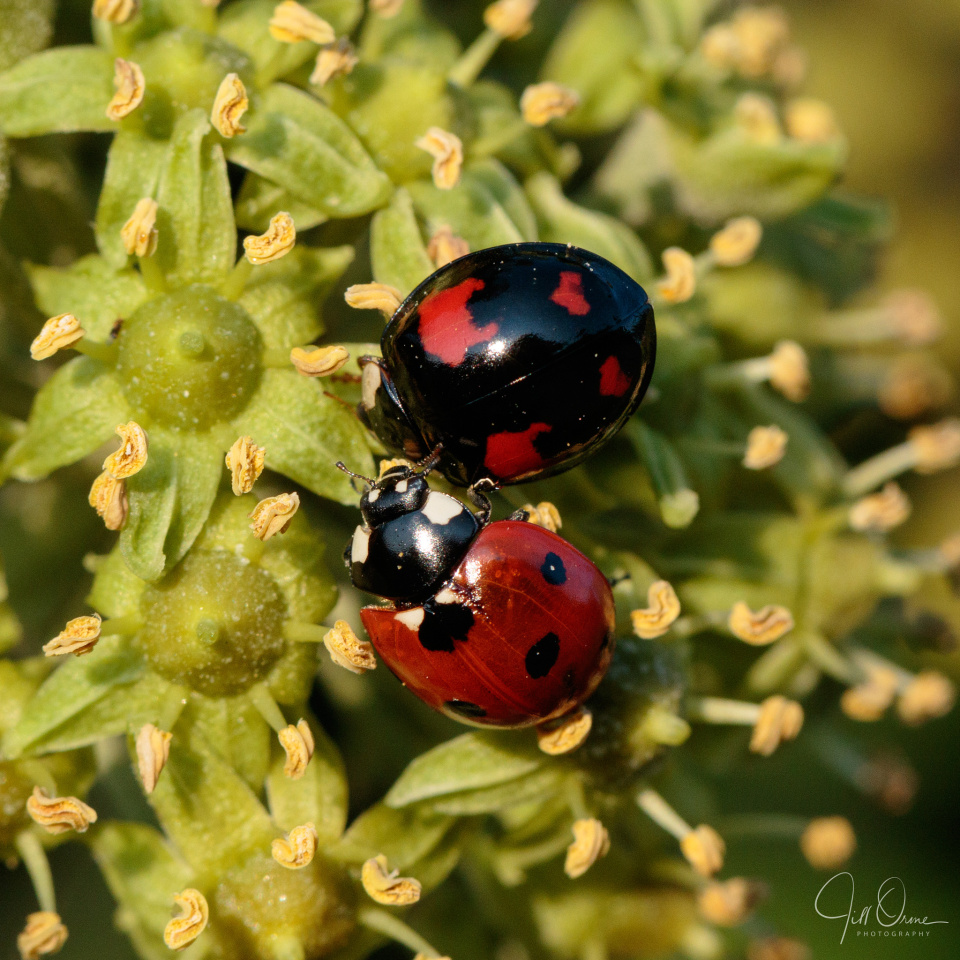 I think that all the gnashing of teeth and throwing of pinnies over heads that’s happened in recent years about the demise of the 7-spot ladybird may have been premature. It was feared that the introduced Harlequin, whose larvae are so voracious that they’ll eat anything that will fit within their mandibles (including other ladybird larvae), would prove so fiercely competitive that the native 7-spot would be eradicated. This wasn’t an unreasonable supposition – after all, it has happened with our native red squirrel being crowded out of much of the country by the American grey – but over the past couple of years I’ve seen many more 7-spots than I have Harlequins, and this summer I’ve even felt that it was worth recording the few Harlequins I’ve found.

For the past couple of weeks I’ve been seeing a lot of ladybirds feeding on the flowering ivy around the village, and again, most of them have been 7-spots, but today I was very pleased to find the pine ladybird (Exochomus quadripustulatus) that I’ve posted below. This is the second time in two days that I’ve spotted an invertebrate that isn’t at all rare, but which I’d never photographed before, so I’m feeling quite pleased with myself. Pine ladybirds are named for the fact that they’re the species most likely to be found on pine trees, rather than because they’re confined to them: in the absence of needled conifers they’ll happily inhabit willows, hawthorns, and other deciduous trees, and can also be found in moorland and marshland. Both adults and larvae feed on woolly aphids, for which reason they’ve been introduced into the United States as a natural pest control agent. 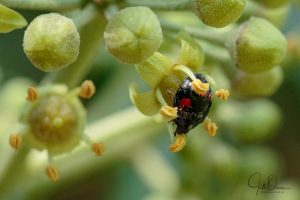 The pine ladybird might well have made it to the top of today’s post if I hadn’t taken a final walk this evening, and found this pair – a 7-spot ladybird and a Harlequin – clubbably sharing an ivy umbel. Ladybirds aren’t known for being particularly sociable, except when mating – and often, not even then – so I was surprised to see these two apparently enjoying each other’s company. They trundled happily over the ivy flowers, and occasionally each other, while I photographed them from multiple angles; I then stopped for a chat with the people whose garden is bordered by this hedge, and went after (but lost) a hunting dragonfly, and when I returned to this spot they were still socialising in their 2-ladybird bubble.

I’m interested in the fact that this Harlequin is just about the same size as the 7-spot, when usually they’re larger, and that its markings are very similar to those of the pine ladybird. I’m not sure what advantage it would gain from doing this, but it does look rather as though it’s imitating Exochomus quadripustulatus.