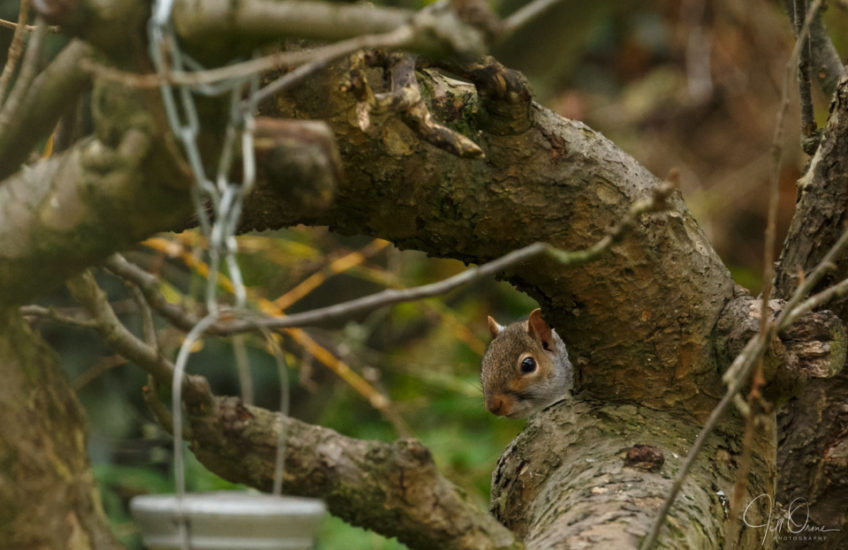 Having spotted me at the window with the camera, he was checking to see if he thought it was safe to go to the seed feeder; in the end he decided that the fat ball feeder, which was closer to him and further from me, was probably safer. I hadn’t planned to post another squirrel photo today – this was one of my “bankers” – but despite trudging my newly repositioned sacroiliac joint all the way round the village, and along some quite out-of-the-way footpaths, I didn’t get any bird photos that I thought were worth keeping. To be fair, the weather was building up towards a storm, and I think that everything with more sense than me was trying to stay as close to home as possible, so I wasn’t really surprised.

This evening I zoomed over to Chipping Campden for choir practice, and discovered that as windy as I’d thought it was down in our valley, up on the Cotswold Edge the weather was furious – I’d never driven the MX-5 in wind like that before, and the sensation of being blown around the road, together with the howling noise across the roof, was really quite alarming. I made it to Campden safely though, and thoroughly enjoyed the rehearsal – all the pieces are really starting to come together now, and I’m beginning to look forward to the concert in ten days’ time. As I was driving homewards, the wind was joined by a torrential downpour, the combined effect being like one of those film scenes you know have been created with fire hoses, and which I’ve always thought look pretty unrealistic – but after a couple of miles of barely being able to see anything except the play of water across the road surface, I’ve now decided they’re quite true to life after all.