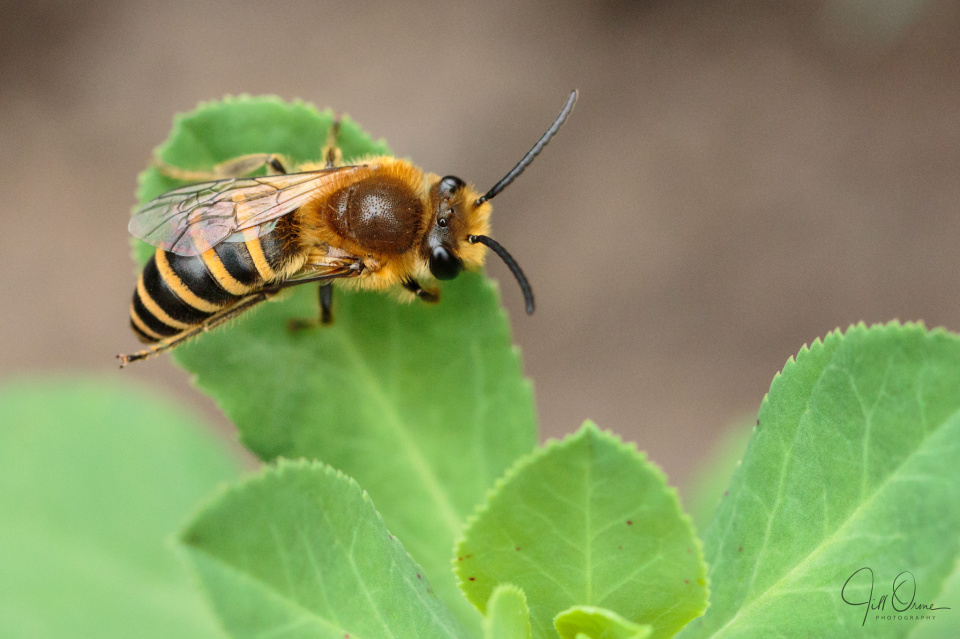 I was due to be in Stratford all afternoon, to help steward the current BGCC exhibition, so I went out around the village with the macro this morning (and by doing that managed to catch the best of the day’s light). Close to the entrance to the butterfly field is a house that’s set quite high above the road, the garden of which slopes down to a low retaining wall, and in one of these banked flower beds are some Colletes hederae nests.

Colletes hederae, the ivy bee, is a mining bee which was listed as a new species as recently as 1993; it first arrived in the south of England from Europe around the turn of the millennium, and has been spreading steadily northwards ever since then. Although it’s a solitary rather than a social bee the females tend to excavate their nests very close together in locations with appropriately crumbly soil, so the emerging bees can form a very obvious aggregation that at first glance looks a little like a honey bee swarm. When I spotted ivy bees in this garden last year – right next to the pavement, on a road corner that gets a lot of footfall – I wanted to talk to the owners of the house, to explain what the bees were and that they’re harmless; but the householders were away at the time, so I printed off some information and put it through their door with an explanatory note. As you can imagine, I was more than happy, on checking the spot yesterday, to discover that the nests were still there and this year’s adults were emerging.

Today the bank, which is possibly eight metres by three, was covered with these pretty bees, and even as I watched more seemed to emerge – small, slow, and slightly dazed-looking individuals, which inevitably were immediately pounced on by those that were already on the wing, and thoroughly investigated in case they might be females. None of them were though: the males of the species emerge first, and they spend their time until the arrival of the females in a frenzy of anticipatory searching, even going back into the nests from time to time, in their programmed competition to find a female and mate. I’ve never seen the spectacle of a female emerging, but it’s said that she will immediately be surrounded by a group of males in a copulation cluster, which on banked ground will roll like a ball until it hits an obstruction and breaks apart.

If I were a female I think I’d be tempted to stay in the nest, but I guess they know less about what’s awaiting them than the observing humans do – and of course, they also have the urge to pass on their DNA. Still, it doesn’t sound like much fun, and the only females I’ve ever seen, harvesting ivy pollen to leave in their egg cells to feed the larvae, have very firmly repulsed any males that approached them, in a “Thank you, but I’ve already done that, and I don’t think I need to be doing it again” kind of way.

The behaviour of today’s males suggested to me that they’ve not yet had scent of a female, but I did check all the flowering ivy patches on my way back home, just to be sure, and found none. As I turned into our lane though, I did have the pleasure of watching two male hawkers – one definitely a large Southern, and the other smaller so probably a Migrant – putting on a wonderful aerobatic display along the hedgerow. They were working different sections, so were able to ignore each other, and a cloud of tiny flies was certainly providing enough food for two. I watched them until a fine mizzle began to fall, and then lengthened my stride and made for home – only to be pulled up short by the sight of a fresh Comma butterfly seeking shelter among the foliage of a neighbour’s weeping lilac. I had to go through all sorts of contortions, and push myself very slowly through some quite scratchy branches, to get this photo, so even though I’d already decided that it was Ivy Bee Day, there was no way I wasn’t going to post it!