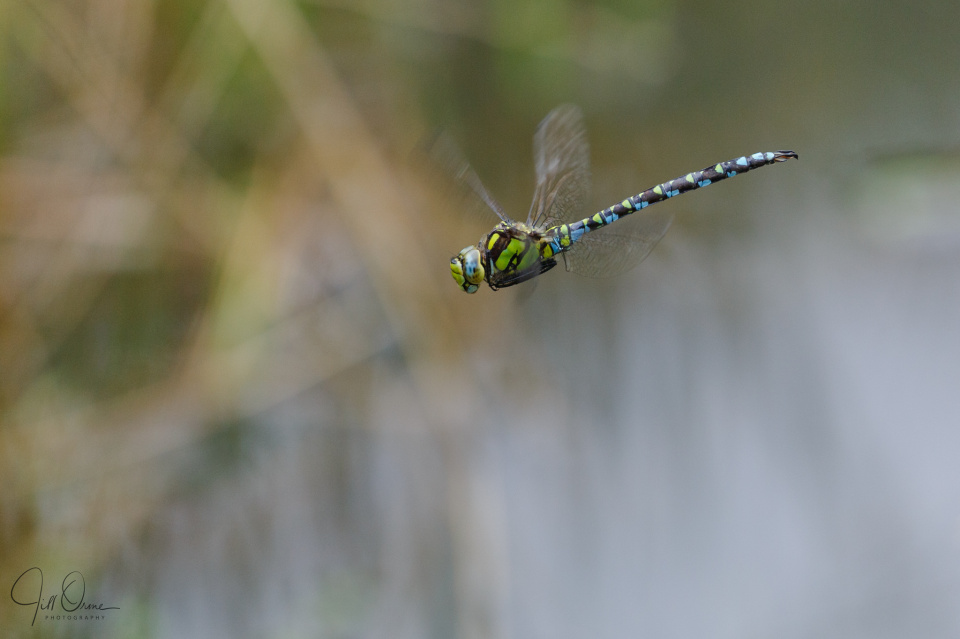 Feeling a little better today, and with the weather said to be due to break, I was tempted into a very small road trip – to Trench Wood, which is only about twenty miles from home. I set off in bright sunshine, but as I drove the cloud cover increased, and by the time I arrived it was faintly spitting with rain, the light was awful, and there wasn’t a bug of any description anywhere in sight.

I’d almost made it down to the pond when I had my first interesting encounter, with a lovely female Southern Hawker; she was flying hunting circuits up and down the ride, and as I had no hope of getting a flight shot I just stood and watched her in the hope that she might decide to come to rest. Suddenly a male zoomed in, grabbed her, and tried to get her to form the mating wheel. She was having none of it and struggled furiously, the two of them winding up down on the ground quite close to me; he tried to lift off again several times, but she was clinging to the grass and he couldn’t lift her. He then curled his body right over so that their heads met, and I can only assume that he bit her, because she seemed to lose her grip, and after a little more struggle he managed to wrench her from the ground and fly away with her into the trees. It was all very fast, and rather shocking, and I was very cross that my photos of the scene were too blurry to be usable!

I walked on and spotted a few more patrolling dragons, but none against a background where the camera could pick them up in the bad light. Then after about half an hour the sky began to clear, and all the insects suddenly started to emerge from wherever they’d been hunkered down. I snapped a few butterflies, but still wasn’t very happy with anything I’d captured, and eventually I decided to make one last visit to the pond before calling it a day.

My first nice find here was an Emerald Damselfly, which I was fairly sure at the time was going to be my blip today – it’s a species I’d never seen before this summer, and I’m very taken with it, so I was happy to find one posing on a grass stalk. In the end though, the damsel was relegated to Facebook, because I was lucky enough to capture this male Southern Hawker in flight, and I think this is technically a better shot. Having photographed him at this point in his circuit of the reeds, I’d just moved a few yards round to my right to try for a photo against a slightly different background, when a female arrived – and the instant he saw her he pounced, plucked her out of the air, and flew off to the trees with her. I’m happy to say that she was more willing than the earlier victim (if she hadn’t been, the two of them might well have wound up in the water), and was curling round to make the wheel as they disappeared from view.