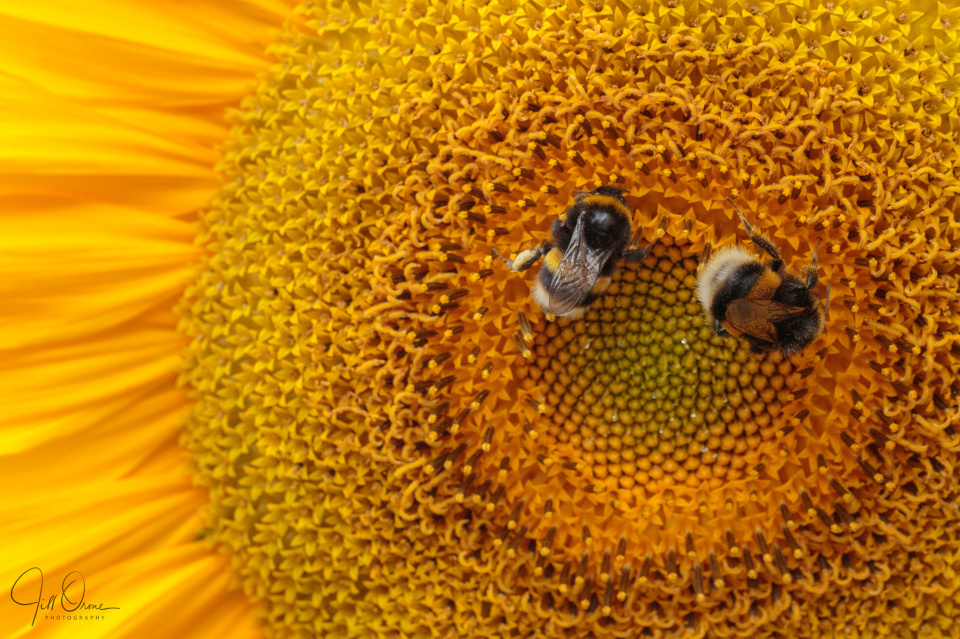 It doesn’t seem like more than a couple of days since I last walked around the village, and I think I’m pretty observant (especially when I’m out with the camera, looking for a photo), but I was brought up short this afternoon by the sight of a large sunflower growing in the very small flower bed outside a row of terraced cottages – it felt as though it had sprung up overnight, like a magic beanstalk or something. The weather was overcast and blowing a hoolie, and the sunflower was waving back and forth at speed, so I probably wouldn’t have bothered trying to photograph it if it hadn’t also been sporting these two rather stylish bees – but in the circumstances it had to be done.

I think that both the bees are Bombus terrestris (the Buff-tailed Bumblebee) – despite the common name, it’s only the queens of this species that have buff-coloured tails, while workers and males both have a white tail with just a thin buff stripe separating it from the distal black band. The one on the left is definitely a worker, because she has full pollen baskets, but I’m not sure about the one on the right, workers and males being very similar in size and appearance.

Buff-tailed Bumblebees have quite broad appetites and will forage from a wide range of flowers, but they have rather short tongues, so something like this sunflower will appeal to them. They usually, though not always, nest underground in holes such as disused rodent burrows, and are unusual among bees in that they often produce two generations per year – or even three, in warm places such as southern cities. They’re the bumblebees that are most likely to be seen out and about in the winter, when they forage on winter-flowering shrubs and climbers.