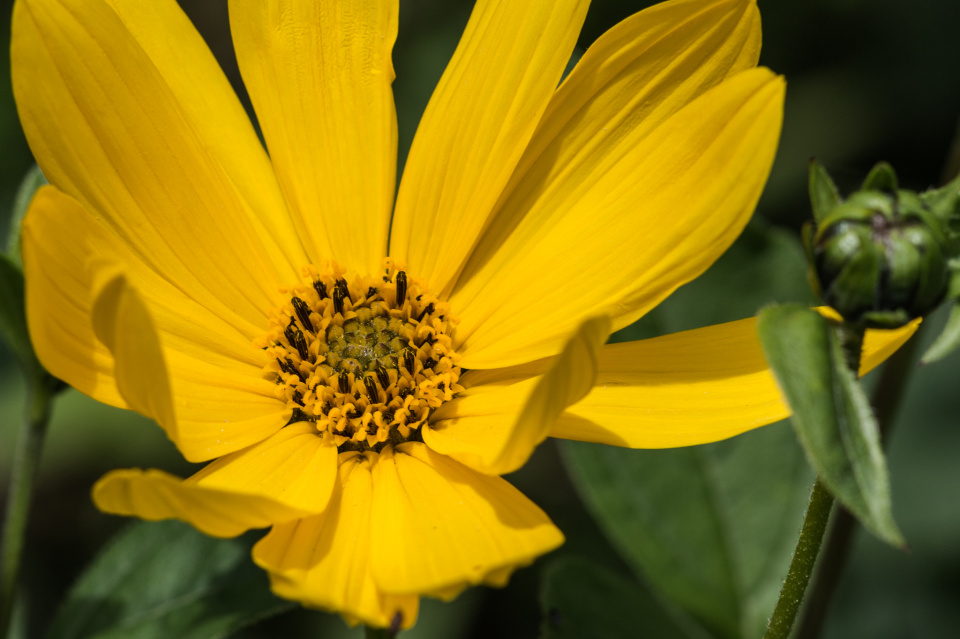 Also called sunchoke, sunroot, or in French topinambour. It’s a member of the sunflower family, and its edible tuber is commonly called the Jerusalem artichoke – though it’s not an artichoke and has no connection with Jerusalem. The plant is actually native to the eastern United States and Canada, and was cultivated as a food source by native Americans; early Italian settlers called it girasole, which is the Italian name for sunflower, and Jerusalem in this context may be a corruption of that word.

Once planted the tubers are extremely persistent – I’ve never planted any myself, but a large patch of helianthus flowers appears in one of my borders every year. They’re rather untidy plants, being tall, with small leaves and slender stems each topped by a scruffy inflorescence. They are a very cheerful colour though, and they attract a lot of pollinators. At the end of the year the top growth dies right back, to reappear the following summer.

I suppose that if you had some you wanted to get rid of, you could always dig them up and eat the tubers – though I’ve heard that even that isn’t a wholly reliable way of removing them from the garden, because if you leave even a small piece of tuber behind it will regrow. It’s said that pigs are partial to them, though borrowing a pig to root up your helianthus tubers might possibly have other, unforseen consequences.

Personally I like the plants, so when I want to cook Jerusalem artichokes I buy them from the supermarket. I toss them in a little olive oil and then roast them for about 20 minutes in a hot oven, after which time the centres will be soft and the skins darkly caramelised. Grated or thinly sliced, they can also be eaten raw in salads. The flavour is sweet and slightly nutty.

The tubers contain a high proportion of inulin, which is a polymer of the fruit sugar fructose, and which is broken down by bacteria in the colon; it’s said to be beneficial in promoting the growth of these “good” bacteria. Because they store their sugars as inulin rather than as starch, Jerusalem artichokes don’t cause a blood sugar spike when eaten, and are therefore a good food for people with diabetes. They also contain useful amounts of B vitamins, potassium and iron. On the other hand, some people find that they cause bloating and stomach cramps, so obviously you should treat them with caution until you’re sure they don’t upset your digestive system!