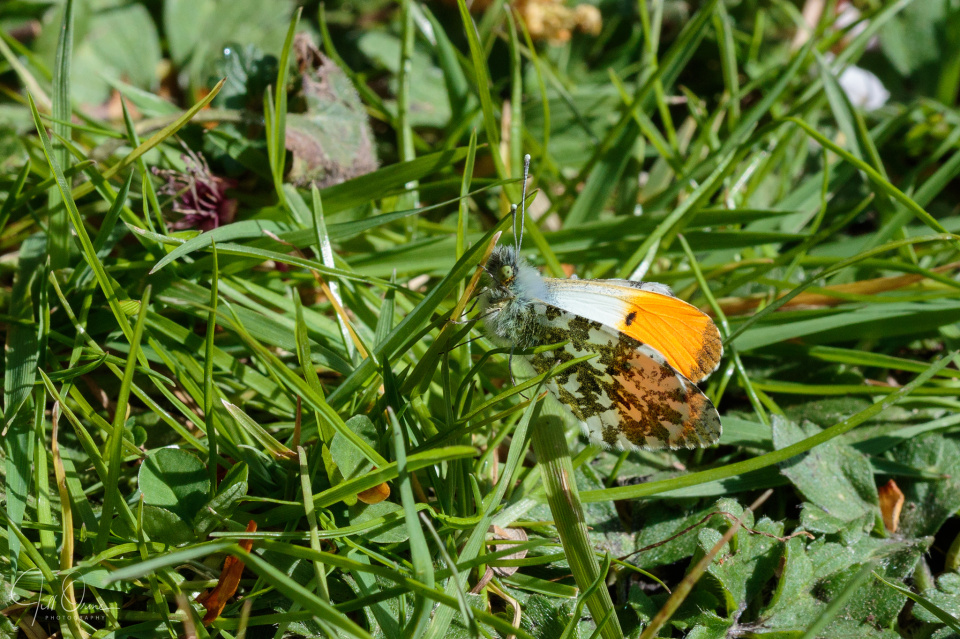 At about 9.30 this morning R came and told me that the Orange Tip was still on the hazel twig in the wild garden, and that if I shifted myself there was a good opportunity for me to catch him backlit. But I didn’t shift myself because I was processing a folder of photo files, and it was after 10am when I finally picked up the macro and wandered down the garden.

Although I didn’t get the backlit shot, my timing was immaculate: I was just within sight of the tree and beginning to try to spot him, when the Orange Tip opened his wings. I was still several metres away, but I grabbed a couple of photos, and then watched in awe as he took off, more than three and a half cold days after first roosting on the twig.

I’d taken the route down through the secret garden, which is sheltered and was very warm, and I stood praying to the photography gods as he made several fluttery circuits of the area. When he landed I crept towards him, taking photos as I went, and I was quite close when he lifted into the air again. The same performance was repeated twice more, and on the third occasion I ended up kneeling on the wet ground not much more than a metre away from him, which was when I captured this image. A few seconds later he was up again, and this time he cleared the hedge and disappeared into the next-door garden, leaving me simultaneously beaming with pleasure and slightly emotional.

I was still in the secret garden a few minutes later, photographing other insects, when a fabulous song started up in one of the damson trees, and after a few seconds I managed to get a good enough view of the singer to identify it as a male blackcap. He was busily searching the trees and hedge, and only stopping to sing for a few seconds at a time, so I didn’t dare risk going to fetch the big gear and simply snapped a few shots with the macro.  I’ve added one of them as today’s extra. 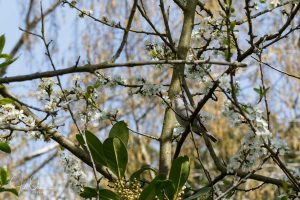 I’ve put a photo from every previous day of the Orange Tip saga, plus four from today, on my Facebook page, if you’d care to take a look.