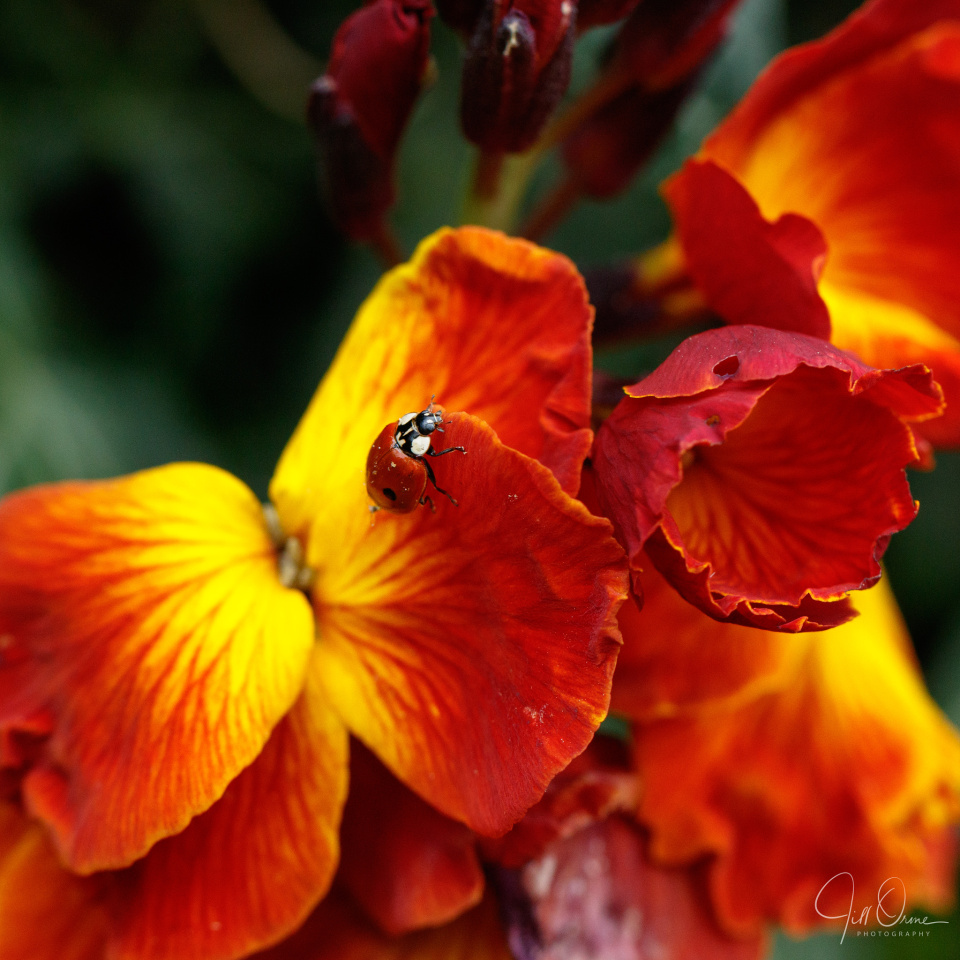 If I’d known that this 2-spot ladybird was going to provide my favourite photo of the day, I’d have cleaned some of the dust bunnies off it when I rescued it from the kitchen sink, before moving it outside onto a patch of wallflowers. I thought at the time that I was just snapping a quick photo for iRecord, which goes to show that you shouldn’t make assumptions.

I had to go to Stratford this morning for blood tests and to collect a prescription from the hospital pharmacy, and afterwards I re-parked in Old Town and walked into town along the north side of the river to run a couple more errands. As I reached the theatre I spotted the lone tufted duck over by the rowing club, in the same place as I photographed him ten days ago, so I fear he’s missed his chance to migrate this year, and unless he has a brainwave and makes a move onto one of the nearby lakes with resident tufties, he’ll be stuck with the Stratford mallards for company until next winter. I had it in mind to circle round past him on my way back to the car, but he’s quite skittish and mobile, and by the time I’d finished my shopping and got back to the river he’d disappeared off somewhere else.

Deprived of a duck, I wandered back through the RSC’s Avonbank Gardens, which were busy with birds, and spent a pleasurable half hour watching the toings and froings, and trying to identify different songs and calls. Tonight’s extra might have been my photo of the day if the light had been anything other than execrable, but I’m posting it anyway because it’s the first time I’ve caught a nuthatch calling – loudly! – for a mate. 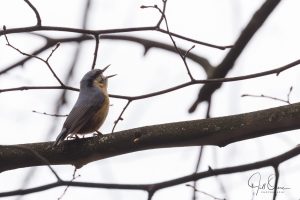 I’d been watching a couple of these sweet little birds following each other from tree to tree in the park, and stopping occasionally to call, when I heard a very loud answering call from inside Holy Trinity Church yard, and went to see if I could spot the caller. Which I did after a few seconds, because it flew out of the conifer in which it had been perching, and landed in the tree under which I was standing, literally six feet above my head. Under normal circumstances I’m striving to get closer to the birds I photograph, but on this occasion I had to back quietly away, and by the time I had a reasonably clear view I was under the conifer the nuthatch had left, shooting though a gap in the fronds. In anything like reasonable light I think I’d have had some fair-to-middling images, but even in Stygian gloom I’m pleased to have seen this behaviour and been able to record it.

It was just after I arrived back home, when I went to put the kettle on, that I discovered the ladybird – the second 2-spot I’ve rescued and released in the past three months. If these tiny beetles are going to make a habit of hibernating in the house, I might need to dust a special little corner for them.