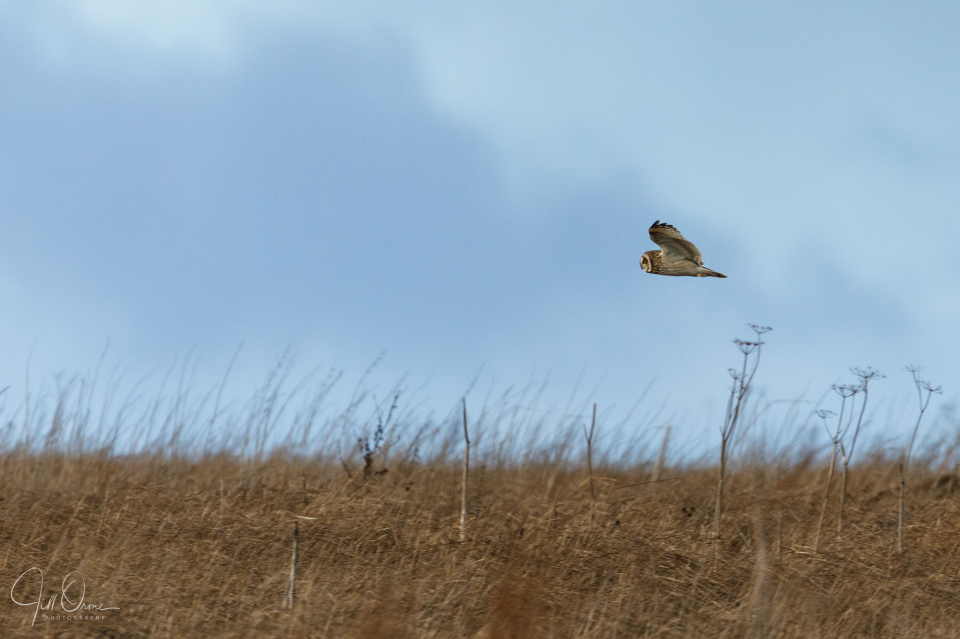 R and I did gardening this morning (eeeurgh). We finished pruning an old leylandii hedge that was planted by our predecessor, and then dealt with the phormium – in the end we cut it back hard, and then R transplanted it for me into a space where it won’t be bothering anything else if it surprises me by surviving. All of this felt quite virtuous, so after lunch I decided that I’d earned a trip to the owl field, and I was appropriately rewarded by two owls going up within seconds of me getting out of the car.

This photo makes it look as though it was quite pleasant in the high Cotswolds today, but that just goes to prove that appearances can be deceptive. The conditions reminded me more of Iceland than anything else I’ve experienced: 3°C but feeling more like -3° in the cutting wind, and changing every few minutes as weather blew across the scarp: shortly after I took this the sky blackened, and then it rained; then it hailed; then while it was still hailing the sun reappeared behind us and there was a spectacular rainbow; and then the rain stopped but the sky went black again; and then the sun set and I came home.

But still…. owls. Happy dance. I’ve chosen this photo because this was about as close as either of the owls ever came to me, but late in the session, in flat dusk light, I did get the special fly-by stare, and I’ve posted that to Facebook.

During the hail I was sheltering by a stone wall in the lee of a hedge, with my jacket hood up and my back turned towards the weather, so when the sun came out and the rainbow appeared I was well placed to photograph it. When I processed the photos this evening and lightened the sky I saw a bird that hadn’t been visible to my screwed-up eyes at the time; and though it wasn’t properly in focus, the shape and markings identify it as a hen harrier – giving me a second tick for the day.

My back-up photo plan for today, in case nothing was flying at the owl field, had been a light pad shot of a hellebore. If I’d had the time I’d have done some more fartnarkling with it, maybe adding a texture or six, but right now I’m just posting it plain, as an extra. 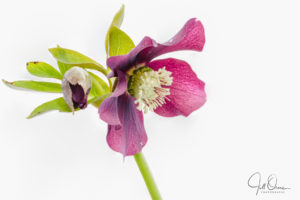