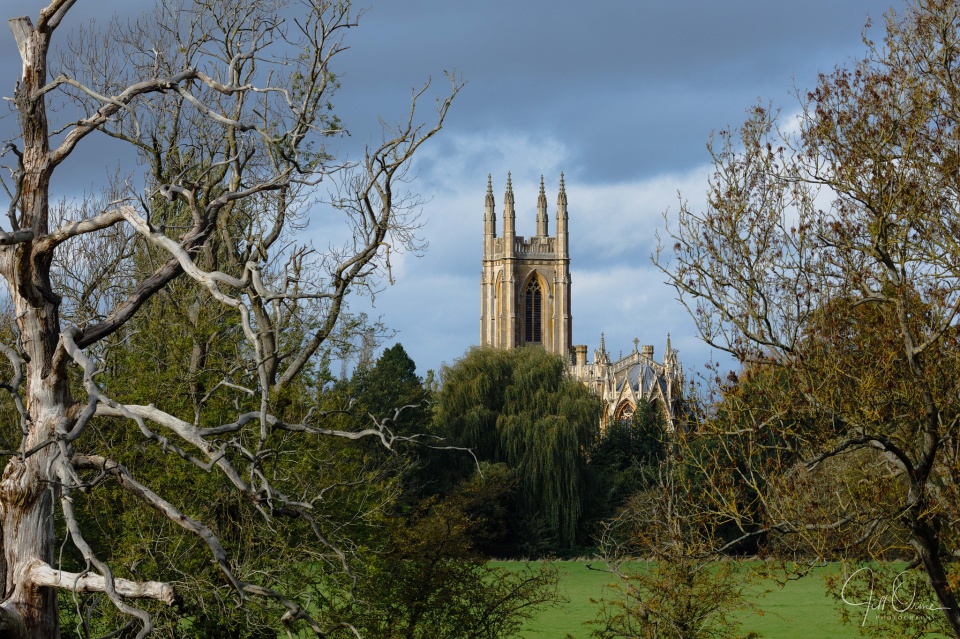 “The spectacle begins to the east, from the road past Charlecote Park. The church rises like a cathedral across the water meadows, set about with trees in a perfect fusion of architecture and landscape. The tower is Perpendicular with elongated pinnacles, the chancel a polygonal apse with crocketed gables that rise above its roofline: La Sainte-Chapelle transported from Paris to a Warwickshire village.”

(“OK. I’m now wondering what he was drinking.” RLO: off-the-cuff critique of the above.)

I never don’t admire Hampton Lucy church as I walk around Charlecote, but as R and I were circuiting Hill Park this morning under a threatening sky, a break in the cloud allowed a shaft of sunlight to catch it, and render it more than usually spectacular. If the deer had performed for us I might have struggled to decide what to blip tonight, but they weren’t doing much more today than on our last visit, so in the event it was an easy choice.

Simon Jenkins further informs me that appearances are deceptive here: the church was built for the Lucy family in the first half of the C19th, by a pair of Gothic revivalists called Rickman and Hutchinson, with help from Gilbert Scott. The first rector was Sir John Lucy, who as you’d guess was a member of the family.

Jenkins goes on to describe the interior, but I won’t quote him on that because I can’t comment myself, never having been inside the church. R and I have said on many occasions that we should pay it a visit, and maybe some day we’ll get round to it, but we’ll need to pick a sunny one because it sounds as though it’s pretty dark in there unless the sun hits the stained glass directly. Which I have to say rather undermines the comparison with La Sainte-Chapelle: we took the Offspring to see that church on a city break in Paris many years ago, and I still remember being completely stunned by its walls of glass. But there’s rich, of course (owning a large chunk of Warwickshire), and there’s the kind of unimaginable wealth that you can chuck around if you’re King Louis IX of France. Everything’s relative.