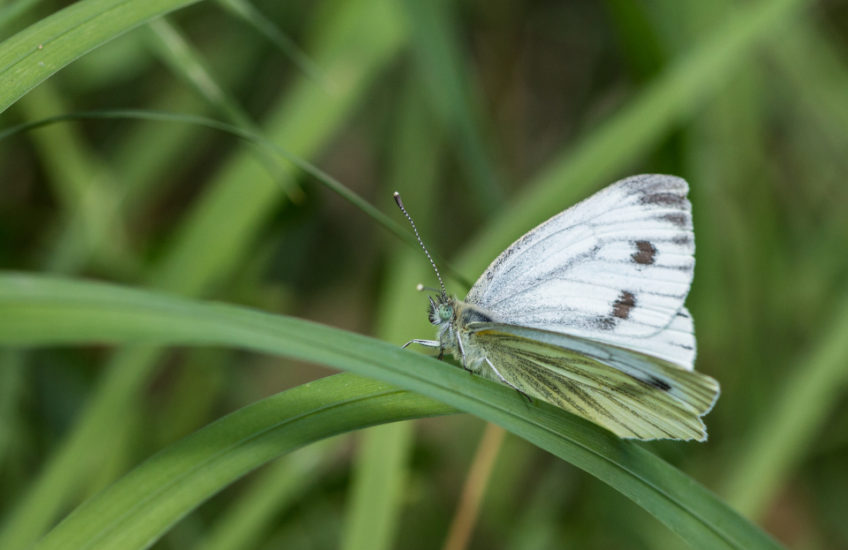 When I walked Arthur early this morning we passed a sunny bramble hedge which was covered with butterflies, including a Comma; but by the time I’d dropped him home and picked up the camera the heat had increased and most of the butterflies had disappeared. I was pleased to find one newly-emerged second brood Holly Blue, but it wouldn’t pose and I only managed a recording shot. There were also some Large Whites about, one or two Meadow Browns, and some Gatekeepers.

In flight I thought this was a Small White, which is a similar size and has quite variable spotting on the wings; but as soon as it settled I saw the underwing markings which give the Green-veined White its name. These aren’t actually green – the effect is an optical illusion created by a combination of yellow and black scales – but they are quite distinctive. There’s a better view of them in the extra photo. 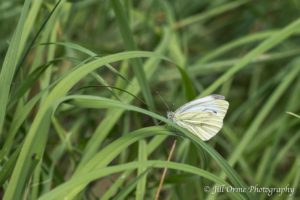 The Green-veined White is a very widely distributed butterfly, preferring woodland and damp hedgerows but also appearing in gardens. It’s not a cabbage eater though, unlike the Large and Small Whites, so isn’t a pest to brassica growers; its larvae feed on woodland plants such as garlic mustard, and bog plants such as watercress. Having spotted this one today I realised that there were many more about, and I would guess that the attraction of this village for this species is the stream that runs along the bottom of the valley, between the wooded gardens.

My favourite thing about all the white butterflies is their striking (and I think slightly mad-looking) aqua-coloured eyes, but I was also taken with the neat way this one is holding its curled proboscis.