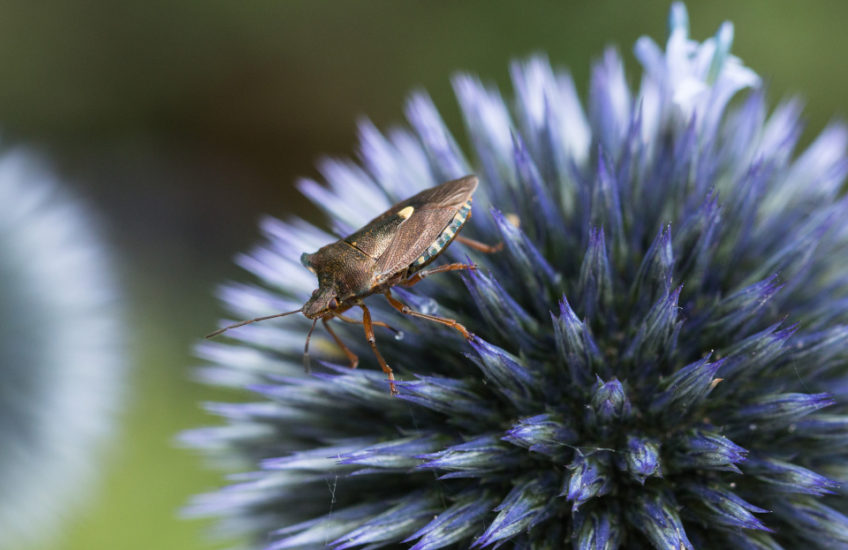 It was much cooler today, and rather overcast, and I assumed that all the bugs which have been laying low through the mini-heatwave would come rushing out to fuel up – but I was wrong. My photo walk this afternoon netted the following:

Some woodland nightshade – rarely seen these days, though I seem to remember it being everywhere when I was a child;
A few honeybees;
Two Gatekeepers, sitting very quietly on some bramble;
One Marmalade fly;
This Forest bug (Pentatoma rufipes), on a neighbour’s echinops.

Until I saw this little chap the Gatekeepers were definitely my most blippable subject, but I prefer the colour and texture contrasts in this shot. It’s not blindingly obvious here, but in a second shot I have which shows all six legs, it’s pretty clear that the central dangly bit with the drop of either nectar or rain water at the end (it was raining slightly at the time) must be the bug’s proboscis. I didn’t know before today that these bugs had a hinged tongue!

If you know me on Facebook you’ll probably already have seen me promoting a short animation which Child One and three of her friends have spent the weekend making, for the AniJam Challenge. It’s sweet and funny, and if you’d like to take a look it can be found on this page. Theirs is called ‘Tiny Encounters’, and if you like it enough to vote for it there’s a voting form at the bottom of the page.