This morning I made my first visit of the year to the Butterfly Conservation reserve at Prestbury Hill. Because all of my target species are small, I realised that I was going to have to search the sheltered lower slopes of the Masts Field, which I’ve avoided doing on previous trips because they’re precipitous in places, and the surface is loose limestone scree – a combination which isn’t enticing, given that I appear to have reached the Falling Over Years. But it had to be done, so I womanned up, muttered a small prayer that if I did go flying I’d be able to get a phone signal and summon help, and set off.

For about twenty minutes I found nothing more interesting than a Brimstone – plus about a million St Mark’s Flies, which are one of the less pleasant features of this reserve in the spring – but despite this, and my constant slight vertigo, I was still having a pretty good time. It was warm, which is by no means a given up on the top of Cleeve Common, but there was a pleasant breeze, and a rather hazy view down over Cheltenham, way below. There were also cuckoos calling both fore and aft of me – which caused me to realise that it was literally years since I’d last heard one – and so many birds either flying overhead or swooping back and forth around the reserve, that I began to wish I’d brought a long lens rather than the macro.

Which is when I caught the first small, fluttery movement at ground level, and immediately forgot the flies, the birds, and the vertigo, in the pursuit of what turned out to be a small day-flying moth. It definitely did not want my lens stuck in its face, but my determination to capture its very stylish antennae finally won out, and I managed good enough shots to have been able to identify it as a Common Heath; if you’re interested, it’s here.

And then – a proper tick: as I stood up and began brushing all the dust and dead stuff off my front, there was another small fluttery movement close by, which when I tracked it to rest turned out to be my first Green Hairstreak. It’s a lovely thing, and quite unusual in a number of ways. Firstly, it’s small – the folded wings are only about the size of my thumbnail. Secondly, it looks quite different in flight, when what you see is the tan upper sides of its wings, than it does at rest, when it folds up the wings to reveal this really unusual Art Deco green colour. According to UK Butterflies the colour is an illusion, caused by light diffraction rather than by pigment, which may explain why it varies such a lot depending on the angle of the wings. I’ve featured this chap because he was quite bold and let me get fairly close, but I’ve put in an extra of a different individual that shows the shape of the wings, and the vivid colour of the underwings when the light hits them straight on. 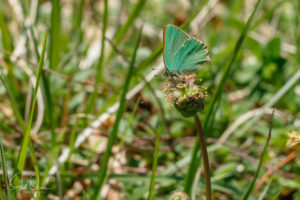 As I was zooming home from Prestbury, this came on my iPod – and seemed marvellously appropriate for tiny fluttery butterflies. Did I mention that I think Chris Thile is the best musician on the planet? I think I may have done, but it bears repeating!