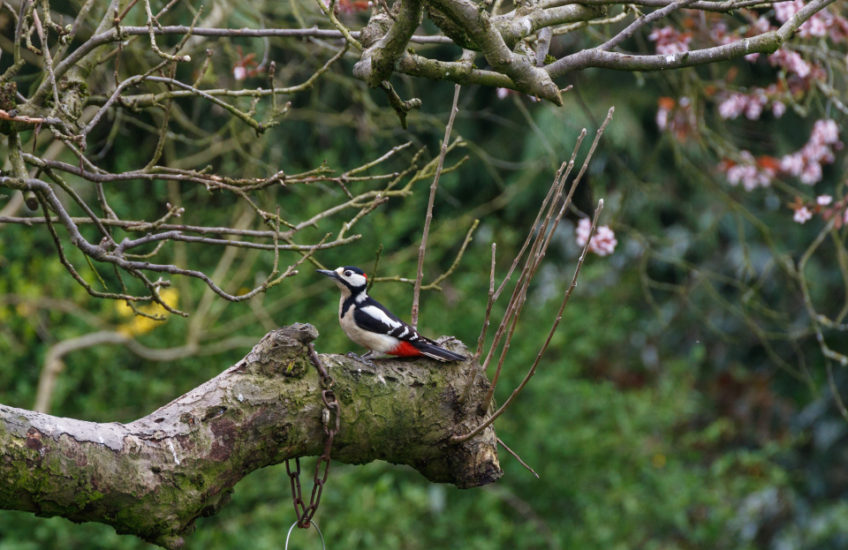 What’s black and white and re[a]d all over?

I’m giving away my age again – my childhood was filled with stupid jokes like this, and despite the fact that I can’t remember a single actually funny joke (and if I could, I wouldn’t be able to deliver it without collapsing in laughter and ruining the punch line), I have no trouble at all remembering what is yellow and dangerous, and what is brown and sticky.

Anyway, I’d say that the answer to the question is not, these days, a newspaper, since they’re printed in full colour and most people don’t actually read print news any more. And nor is it a Mono Monday entry, though I have seen the odd colour pop slipped in on MM (hint for the next time I’m judging – I don’t care for it). But it is the phrase that leaps into my mind every time I see a Great Spotted Woodpecker.

I had a bit of a Eureka! moment this afternoon, when I noticed a squirrel desperately (and unsuccessfully) trying to lower itself down onto one of the chained seed feeders; I didn’t want to open the back door to take photos, because it makes a noise which usually startles everything in the garden away, but it suddenly occurred to me that I could probably open the snug window quietly enough not to cause a disturbance. I could and I did – though the starlings scoffing meal worms on the lawn were onto me at once and rose in a noisy cloud, none of the other creatures that were about at the time could work out what they were panicking about, so they all stayed put, including this beautiful chap. The red on his neck tells that he’s male, and an adult, but his pristine markings suggest that he’s only just fully grown.

I was torn between this shot and a couple of others I took of him; and between the woodpecker and a jackdaw which then arrived and perched rather photogenically higher up in this apple tree; but decided on this one because it’s the clearest GSW photo I’ve yet managed. There’s more woodpecker here, and jackdaw here, if you’re interested.