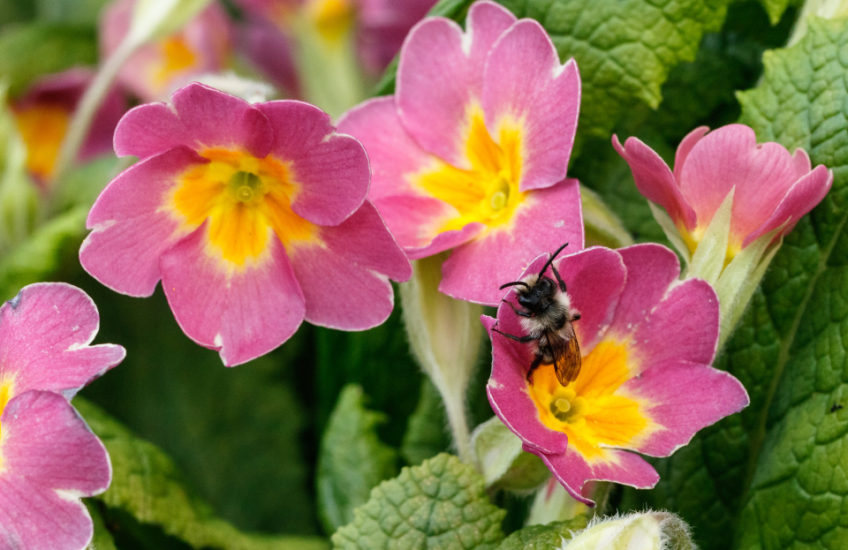 As this border of our front garden is only a few yards from the verge where I photographed an Andrena cineraria at the weekend, it’s probably the same individual, continuing to look after the area he’s marked out as his territory. I couldn’t resist his Saturnine good looks against the girly pink of the primula – and this shot gives you a much better sense of how small he is than the one I posted on Saturday.

Today was a pretty desk-bound day, what with all the catching up I still have to do from last week, and some of that backlog needing to be dealt with by Friday (YIKES!!) – but I did manage half an hour’s gardening, and a quick bug walk. The most interesting thing that happened all day was just before dusk, when I glanced out of my study window to see a fox strolling across the front garden; it appeared to have come in through the front gate, and walked the length of this border before hopping neatly over the wall, crossing the road and disappearing into the orchard where the Little Owls live. If it had been about an hour earlier it would probably have bumped into one of the pheasants, which could have been messy and a bit upsetting – but it was quite thin and may have been a vixen with cubs to feed, in which case I could hardly have begrudged it a meal. I knew that neither camera had a long lens on, so I didn’t bother trying to photograph it (and in any case the light would probably have been too poor) – but I hope to see it again another day.