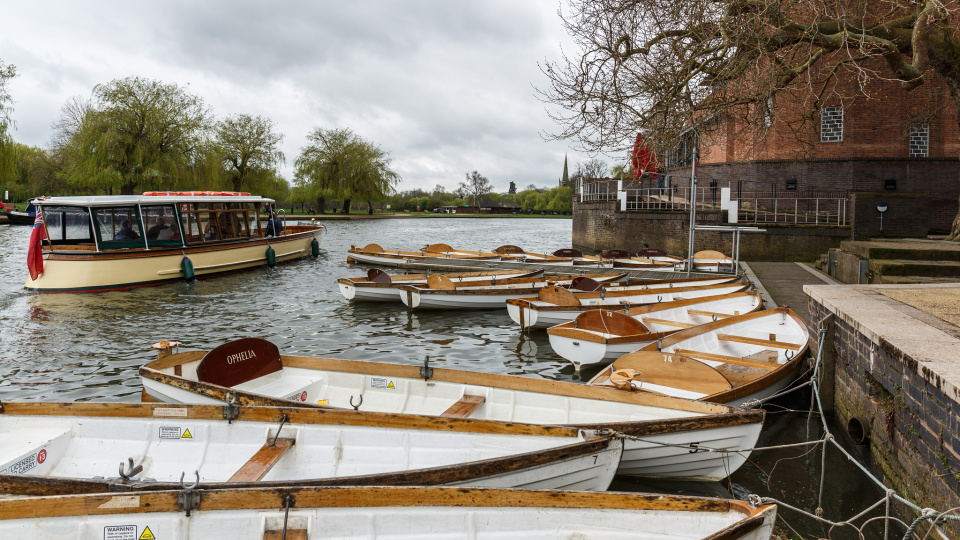 Signs of spring in Stratford today:

People sitting by the river to eat their lunch.

The rowing boats reappearing at the landing stage next to the Royal Shakespeare Theatre.

Hordes of French schoolchildren (they always seem to be either French or Spanish) wandering around the town, bored and under-supervised, looking for low-level damage to inflict. Why do their schools bring them here? I did Molière at school, and we never got taken on a trip to wherever he was born (“Awww,” said R). For that matter, I did Virgil and Homer, and we never got taken to Rome, Greece or Troy either.

A horrible great observation wheel being erected on the south side of the river. No-one wanted it; everyone objected, including a ton of townspeople and several statutory agencies, but the District Council gave it planning permission anyway. Far be it from me to use the word “bunce”, but… yes, well. It’s only temporary, allegedly. For the tourists. We’ll see.

If I’m grumpy (I am grumpy), the idiotic wheel and les collégiens français are just a superficial flash point. Really it’s all about Brexit, which was formally triggered today. I am still genuinely bereft about this lunacy, and because being permanently grief-stricken is exhausting, I hereby give formal notice that I plan on sublimating my distress and being furious about it for the rest of my life. And to the Will Of The People/ We Won, You Lost, So Get Over It/ Stop Doing The Country Down And Help Make It Work brigade, I say this:

You’ve got the thing you’ve been whining for for the past four decades – the one thing that you said would make everything wonderful again, the way it was in The Good Old Days. So you can shut up now. I don’t want to hear a word of complaint from you about anything, ever again. And it’s your party, so you can make it work. I plan on doing what you’ve been doing since 1973, and blaming everything that goes wrong henceforward on you.