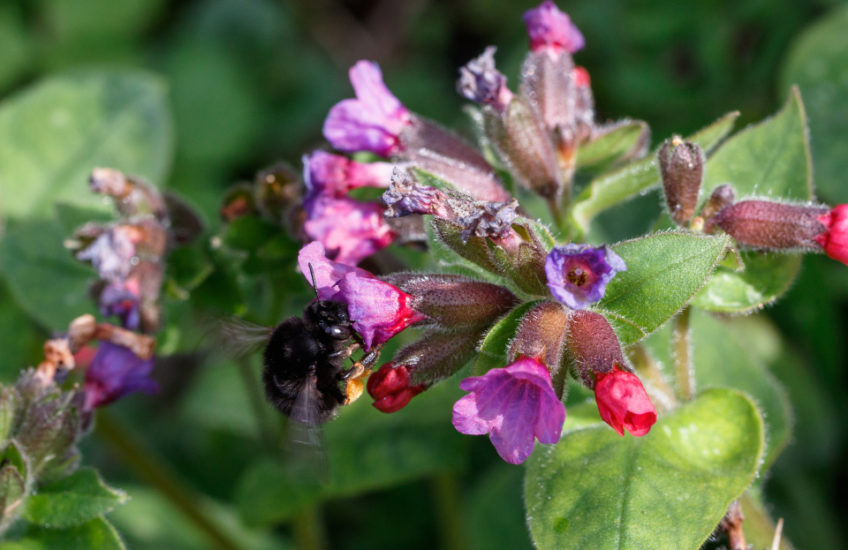 I already had a handsome Hawthorn Shieldbug (Acanthosoma haemorrhoidale) for you – discovered in one of the nettle patches in the wild garden (not that there aren’t also nettle patches in the supposedly tidy garden, but in the far garden they’re bigger and fiercer, and home to quite a bit of bug life). But then I spotted a fast-moving black bee with tawny back legs, and as I choose to believe that you’ve been awaiting the arrival of the female Anthophora plumipes nearly as keenly as have the boys, I knew I had to get you a photo of her.

At first she was a demon to photograph because she wasn’t still for more than a fraction of a second, and even though I was using the 7D it wasn’t picking her up quickly enough for me to get a decent shot – so I’ve discarded a lot of images of bits of pulmonaria plus a blur of bee, or bits of pulmonaria with no bee at all. And then she upped and left, zooming across the road to the verge where I thought I saw her a couple of days ago (but couldn’t be sure, because that time she was literally just a blur crossing my field of vision). I hung around, photographing other things, and after a few minutes she came back, and this time spent longer drinking from each flower she visited, so I was able to get a set of shots. I have a couple which show her face and extended tongue more clearly, but I’ve decided that I like this one because of the sense of movement in it.

During the time I was watching her she was approached by a couple of males, but she wasn’t interested in them at all, so I guess that she’s not yet ready to mate. She may still be looking for a nest site; her preference will be for a sunny, vertical surface such as a dry stone wall, but if pushed she will nest in a hole in the ground. Once she has her site and has mated, she will construct an individual chamber for each egg she lays, stocking it with pollen collected on those tawny leg hairs. The lifespan of these bees is quite short – the males will begin to die within the next two or three weeks, and the females will probably only fly until mid-June – and I read somewhere that the whole business of constructing and stocking a nest is so time-consuming that a female A. plumipes will scent-mark a good food plant so she can fly straight back to it, and not have to waste foraging time on searching.

When I’ve processed the rest of today’s photos I’ll update my March bugs album on Facebook; but for now I’ve posted the Hawthorn Shieldbug here as an extra. 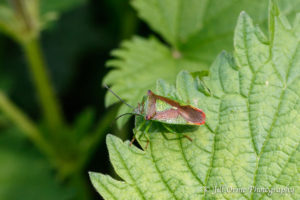