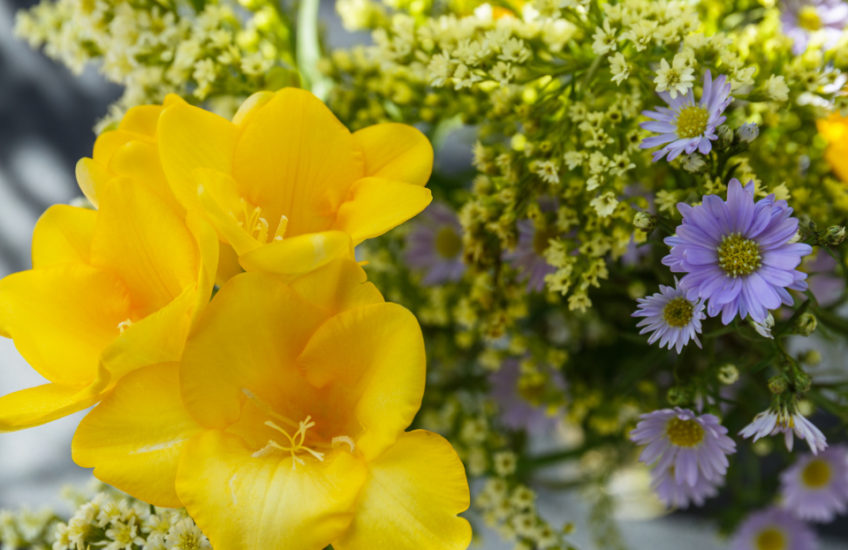 I think I may have gone a little off-piste with this photo of the Mother’s Day flowers I received from the Offspring last weekend: I was trying to give a sense of their charming yet casual springiness, but I fear I may have overdone the casualness, and not conveyed the charm as well as I would like. Perhaps you really needed to be see them in person – which would also have allowed you to bask in the wonderful smell of the freesias.

The twenty minutes I spent playing with them was almost the only time I took away from my desk during the main part of the day. I was trying to finalise two competition entries, one for the IGPOTY Mono Project, and the other for my local Wildlife Trust’s 2018 calendar, and as last year I was shortlisted in one and a runner-up in the other I put far too much pressure on myself, and fell into such a state of indecision about what to submit that I was close to not being able to choose at all. R gave me the benefit of his eye, which is very good; but even after I’d decided on my submissions I then spent hours tweaking the images, before giving myself a bit of a talking to about things that don’t really actually matter all that much in the grand scheme of things, and the necessity of getting a grip.

Eventually, with a sense of relief, I uploaded four images to the IGPOTY web site and put six onto a disk for the Wildlife Trust (which doesn’t have the technology to accept large printable files on line). The IGPOTY deadline has now passed, and the Wildlife Trust disk went into the post when R and went to Stratford late this afternoon, so the die is cast – and I’m happy to report that the talking-to worked so well that I can already barely remember which shots I used.

Which isn’t to say that I won’t get myself into just as much of a tizz the next time I enter a competition. I think that I either need to do more of them, or fewer: more would accustom me to the process, and might allow me to become more decisive about my choices and philosophical about the outcome (eventually, possibly), but fewer would be less time-consuming and less enervating for me, and would provide R with less mithering to listen to. At the moment I’m inclining towards fewer!