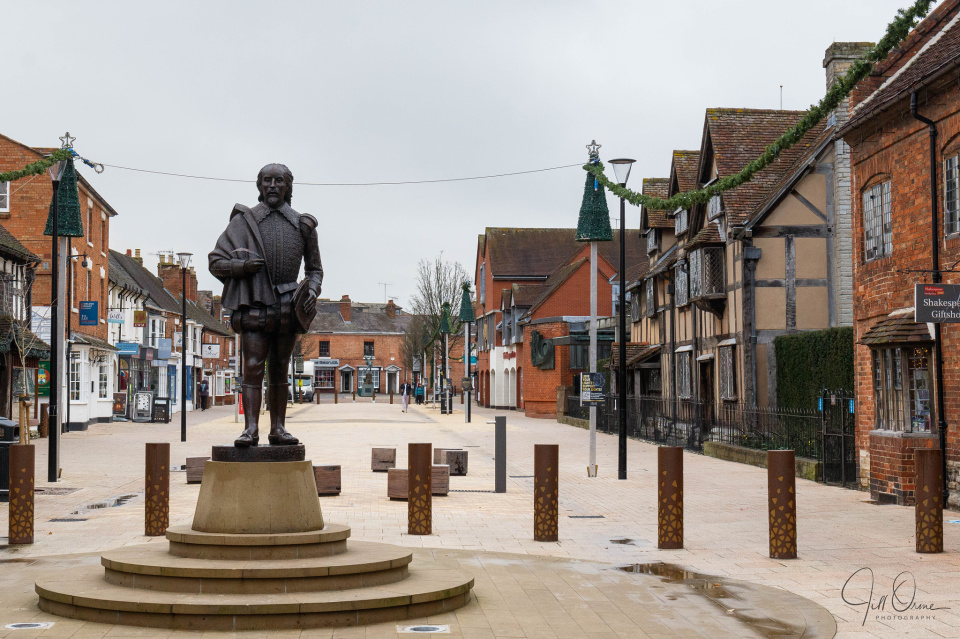 Firstly, I’d like to thank everyone who has congratulated me and said nice things about my CPAGB award, either here or over on Facebook. It’s one of the delights of blipfoto that so many members are so supportive of and encouraging towards their blipmates – even those they’ve never met in person. I’ve been very touched by the response, so once again, I thank you.

Further – minor – excitement occurred today, in the shape of a trip to Stratford to collect a supply of medication from the hospital pharmacy. It seemed sensible to combine this visit with some exercise, so I parked the car in Old Town and walked up to the hospital from there. There was quite a lot of through traffic in the town, but very few people – one wide-angle shot I took of the High Street, time-stamped 13.07, has exactly five people in it, and three of those were working in a group.

This is Henley Street, which under normal circumstances would be packed with tourists and shoppers. The half-timbered building on the right is Shakespeare’s Birthplace, and the modern one beyond it is the headquarters of the Birthplace Trust. All the Shakespeare properties are currently closed, as are the shops along this pedestrianised street, and though some of the many cafés are still serving takeaways there wasn’t much sign of anyone patronising them.

As well as my errand at the hospital and a walk around the town, I got a coffee from one of two places on the High Street which are serving from counters set up across their doorways; and bought some meat for slow-cooking at the weekend from the butcher, who allowed me to call my order from the doorway and then brought it and the payment terminal out from behind the counter, so that I only had to take two steps into the shop to complete the transaction, and was back outside within fifteen seconds. If he thought I was mad, he hid it well.

After completing my errands I walked back to the car along the north side of the river, where the tufted duck count is currently zero.