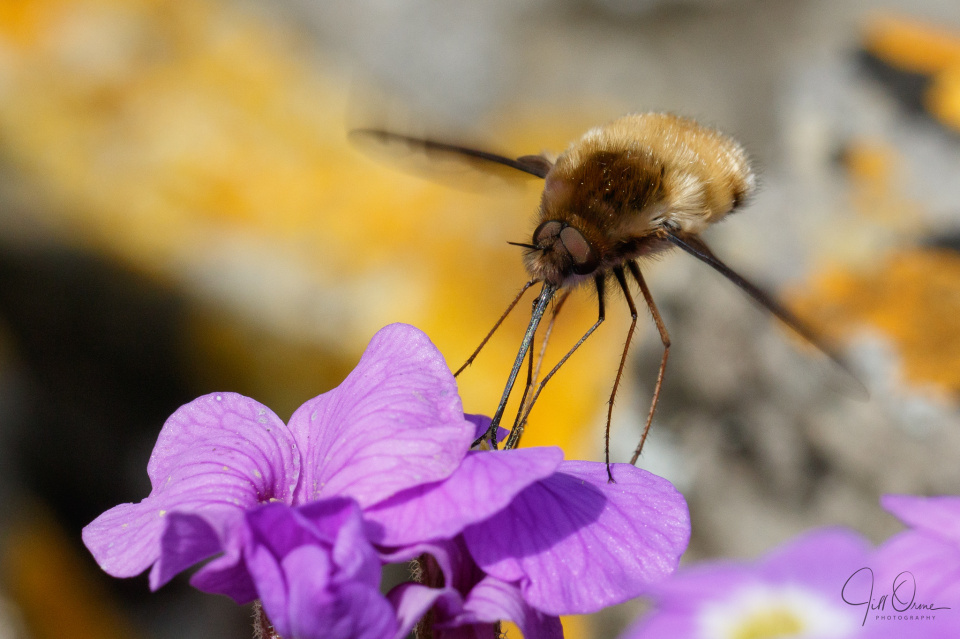 Mother’s Day: croissants with chocolate spread for breakfast, phone calls and flowers from the Offspring, a trip to the garden centre with R, a happy hour chasing invertebrates around the garden in the spring sunshine, and finally this afternoon, a Facetime call with Covid Baby, who rose to the occasion by playing tricks and hooting with laughter even though he was clearly under the weather. All in all, a pretty perfect day.

I’m pretty happy with this image of a dark-edged bee-fly feeding from the aubretia on the garden wall, though I was surprised on uploading my files to see that even 1/1000 second is not enough to freeze the wings. It’s no wonder these little flies need to eat almost constantly, given the amount of energy they expend. Out of around a hundred frames I shot of the scene, I’ve chosen this one because it shows the fact that the bee-fly’s remarkable proboscis is bifurcated, which is something you don’t often see. I’d be very interested to know more about the structure and function of the proboscis, though I probably wouldn’t like to read about the kind of investigations that would be needed to elicit that information – not being an entomologist, I’m happier letting insects live out their lives in peace than that they should be sacrificed in the name of scientific knowledge.

The title of this post could be read as a comment on the bee-fly’s highly functional tongue, but actually it came to me when I looked at the image closely on my large Mac screen, and realised that his droopy eyes and walrus moustache put me quite strongly in mind of Albert Einstein.