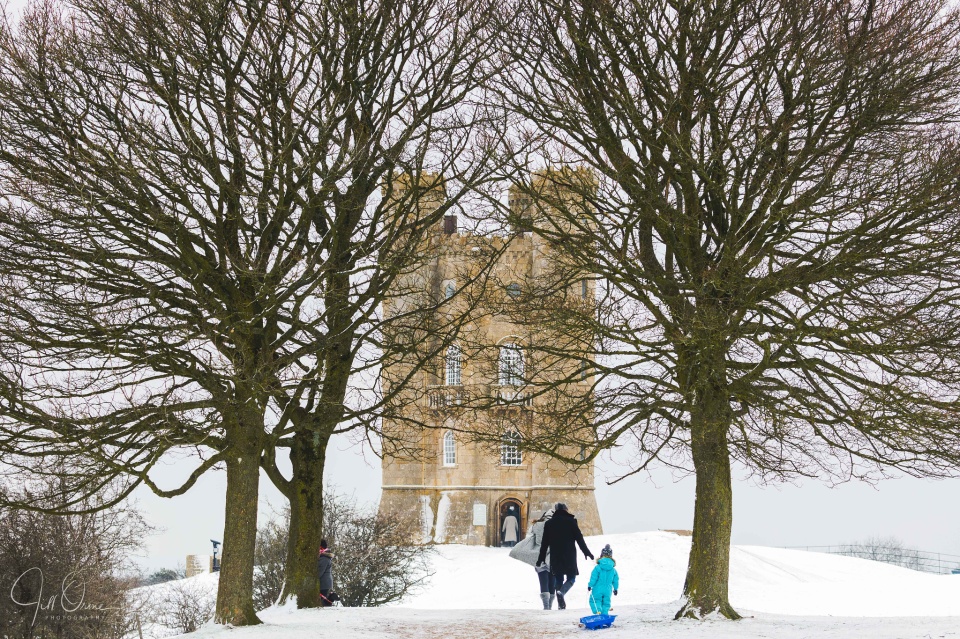 Unlike some areas of the country, we had just a dusting of snow in the Vale last night  – not enough to be disruptive, fortunately, but not enough to be photogenic either. Even Broadway, when R and I went out for coffee, was barely dusted, though the thought that it might be heavily affected (which certainly can happen) had kept most potential visitors away; I felt sorry for the High Street traders with barely any customers, but the upside for us was that we had our pick of cafés, tables, and cake.

On the way home R braved Fish Hill and Buckle Street, to get me to the Broadway Tower in the hope of a snowy photo. This high up on the Cotswold scarp you can get snow when there’s none at all down in the Vale (which was actually the case yesterday), so this counts as a very minor snow fall. But on balance it was about perfect: much more, and R’s car would have struggled to get up the hill – and possibly wouldn’t have struggled at all to get back down again.

I was charmed by the small child in the snow suit with the toboggan, but it was viciously cold so I didn’t hang about to watch the sledging – just rattled off a few frames and slithered back to the car. When I uploaded the photos they were pretty flat, so I’ve pushed the processing further than I normally would, to try to give them a lift.