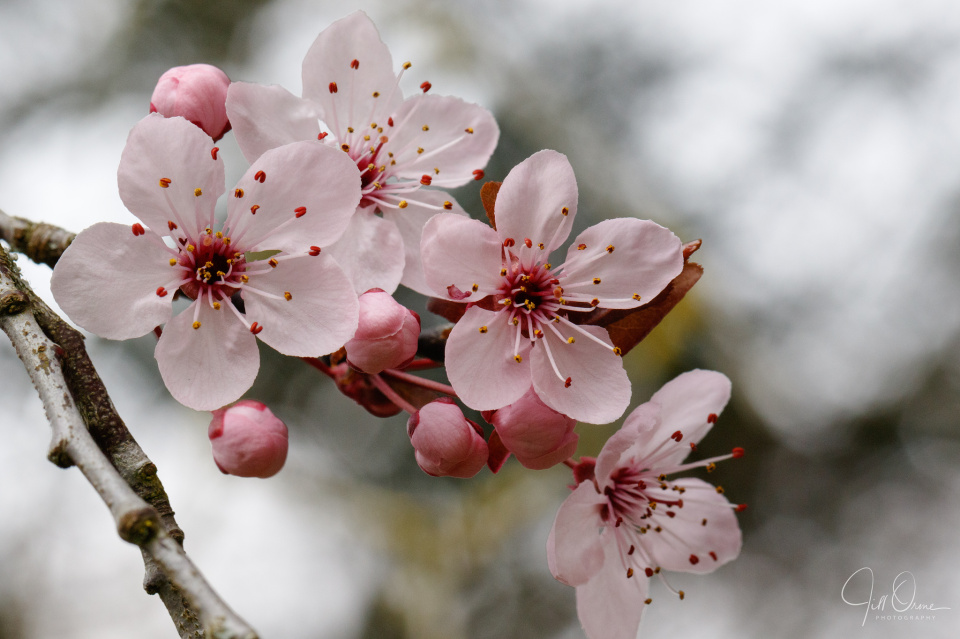 It was another horrible day, weather-wise, and I spent most of it at my desk trying to clear a mountainous backlog of processing. I ventured out into the garden at lunch time for the sole purpose of taking a photo, and was happy to discover that the pink cherry plum is coming into blossom, but couldn’t see an easy way of photographing it: most of the flowers were way above my head, and because the growth is spindly they were being whipped around in the wind.

In the end I managed to grab a twig and pull it down, and then get hold of a slightly higher one and pull that, and so on until I had a small spray of blossom more or less at head height. I was hanging onto it with one hand and using the camera with the other when the twig I was holding snapped, and the branch bounced away from me. And – breathe….

I got this at the third attempt, and in the circumstances I’m astonished that it’s more or less in focus. Not only was I pulling the bough downwards with quite a lot of force, but I also had to hold it as far away from me as I could manage, so as to get as much of the blossom spray as possible in the frame. The action was fairly similar to the one you might use in pulling a longbow, if someone on a ladder was trying to drag the longbow upwards out of your grasp while you attempted to hold it steady.

As soon as I had my shot I scuttled back to the house, and stayed in the warm drinking tea for the rest of the afternoon. My step count for the day was dismal, but I felt I’d had all the exercise I needed.