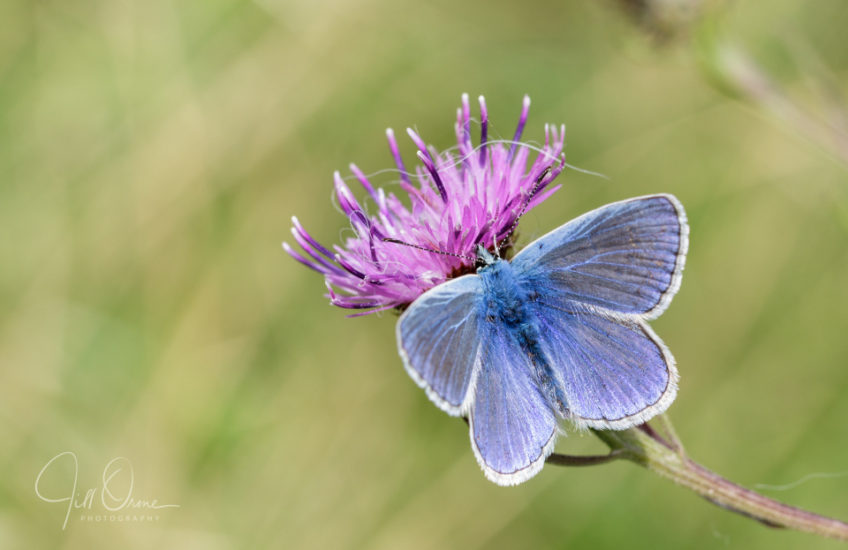 Firstly, thank you for all your kind words yesterday – I’m afraid I’m still stiff and sore, but I’ve been much cheered by all your positive messages. And I know that this is just a process I have to go through, and all will come right again sooner or later.

This morning Child Two went off to resume his normal life in the frozen North, leaving the house very quiet and his aged parents wondering what to do with ourselves. R’s solution was to propose a trip out to Chipping Campden for coffee and cake, to which I readily agreed, but first I went for a stroll around the butterfly meadow to see what might be about. It was very gusty, with scudding cloud causing the sun to come and go, so the light was tricky and the bugs were largely uncooperative, but I did photograph a few things – notably a pair of extremely battered Brown Argus with their wings almost in shreds, poor things, and a Small Copper that was nearly as worn. I also played my now regular game of Hunt the Grasshopper, and managed to win a few rounds of that.

But the most surprising thing, given how late we are in the season, was a crop of completely fresh Common Blues, of which this is one; you can see that he’s absolutely pristine, and given that these are feisty and combative little butterflies, and given also the fact that the long grass in the field is still being whipped around by the strong wind we’ve been suffering for a couple of weeks now, he can’t have emerged more than a few days ago – if that. I was lucky to catch him nectaring on this knapweed, which was hanging low enough over the path for me to have to kneel down to photograph him. The hair isn’t mine, even though it looks as though it could be!

This afternoon I finished processing the shots I took on Thursday at Prestbury Hill, and put some in an album on Facebook, if you’d care to take a look.