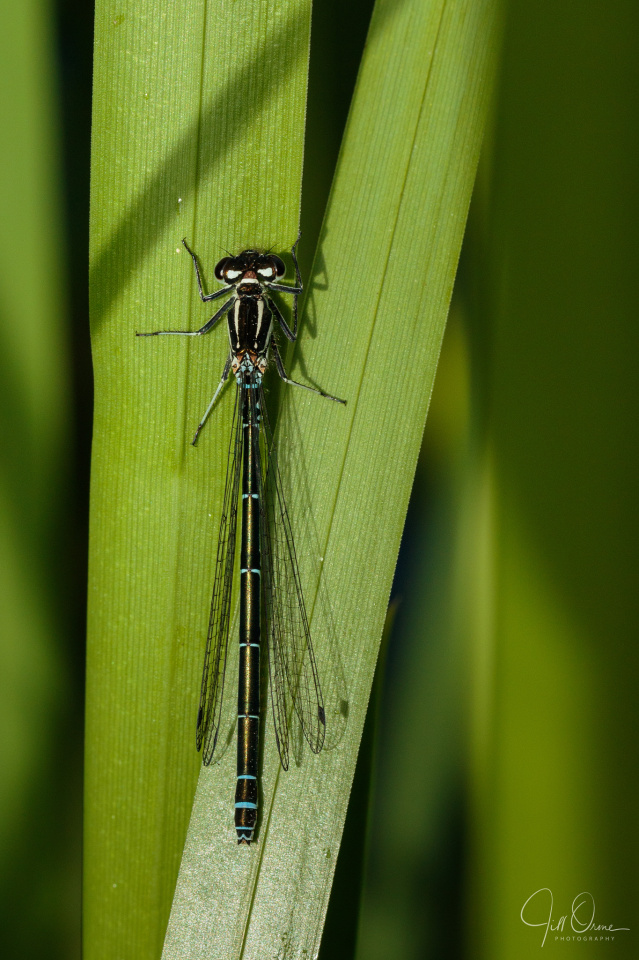 This is the first damselfly I’ve found in the village this year – an occasion that merits a post, I think. I spotted her when I stumbled over to my neighbours’ pond late this afternoon, after a day of pre-wedding craziness so exhausting that R and I could barely speak by dinner time, let alone eat. Anyone who knows me is likely to be raising an eyebrow (or two) at this juncture, at the thought of me ever being too anything not to want to eat, but that’s the way it was.

In other news, I have a lump on my left arm the size of a squashed quarter pound of butter, one on my right wrist bone the size and colour of an acid drop, and one in the middle of my forehead that looks as though my brain is trying to push its way out from inside my skull. So it’s a good thing I’m not staring down the barrel of having to be in any photographs that someone might want to keep looking at for the rest of their lives. Oh, wait…

However, on a more positive front, I’ve had some surprising and welcome news about my own photography – but I’m not allowed to tell you yet what it is. Don’t get too excited: it’s just a small thing, but that doesn’t mean I’m not feeling quite smug about it. I’ll fill you in properly when the embargo is lifted.

Oh, by the way, I can’t tell you exactly what this is. I was pretty sure that she was an Azure Damselfly, and that’s still my best guess, but someone in the Odonata group on Facebook has just said sorry (why do people feel the need to say “sorry” when what they really mean is “I think you’re an idiot”?), but she’s a Variable Damselfly. I can’t be bothered to argue, but in my opinion her eye spots would be joined together like a dumbbell if she was Variable – though there’s a clue in the common name of that species to the fact that their markings tend to be a bit…. variable. I shall have to post her to iRecord, and see what the nice Mr Averill thinks.

Update: The nice Mr Averill agreed with me that she was an Azure. Yay me!