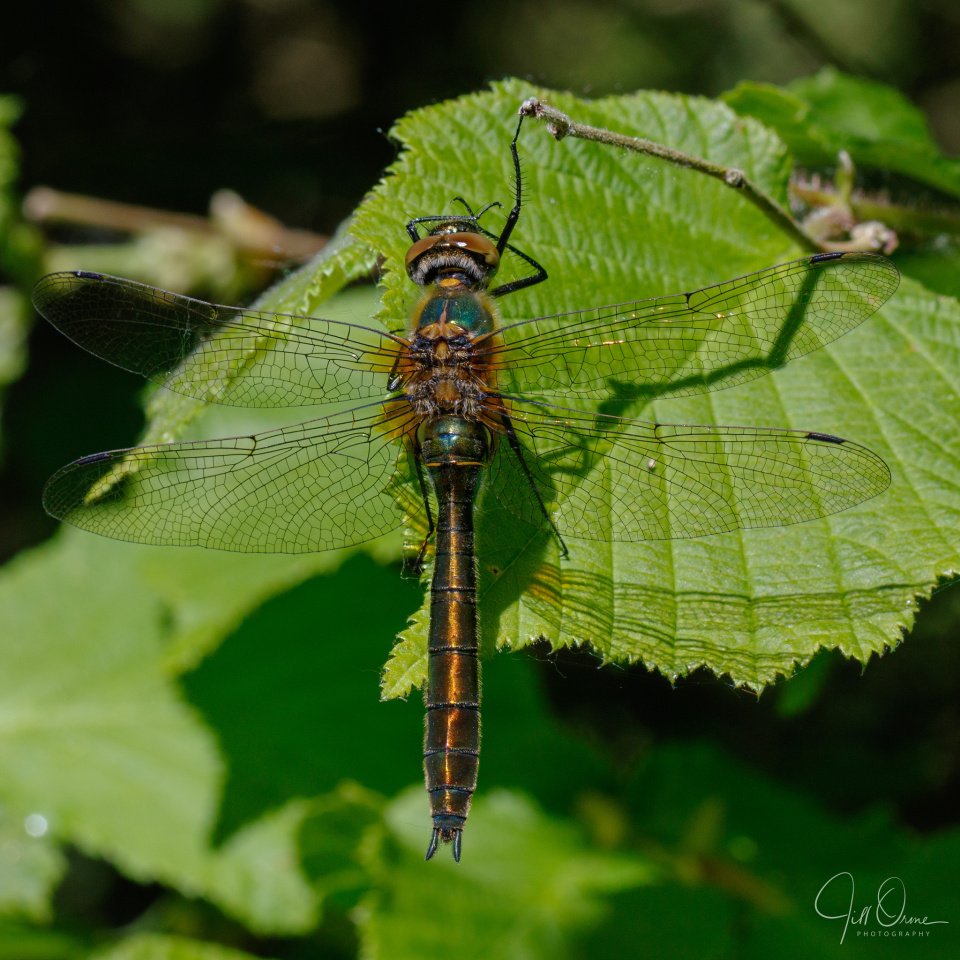 From dragon despondency to dragon delight in less than a week: my second trip of the season to Lower Moor Farm in the Cotswold Water Park this morning provided me with a fly-by sighting of a Hairy Dragonfly, and – better yet – several photos of a Downy Emerald. Three new species in three days make this a good dragon season, even if it did get off to a late start.

This is an immature Downy Emerald, because the eyes of a mature individual are green. I can’t quite decide on the sex, because the abdominal shape doesn’t look absolutely right for either, but if pressed I’d take a punt on it being a male. Or…. maybe a female. I had assumed – quite illogically – that because these dragons are relatively rare in the UK, they’d be shy and retiring when you did find them, but in fact they’re bold and curious: several times this morning I had one fly right up to me and hover, checking me out, in the same way that Southern Hawkers tend to do, and this one sat perfectly still for a good couple of minutes while I homed in on it with both lenses in turn. I love its casual hold on the twig, and the forelegs crossed over the face – I almost feel that it was doing a facepalm because I was taking so long to get the shot I wanted!

Having snapped my Downy Emerald, I really had to blip it, but there were several other candidates for today’s post, one of which I’ve put on Facebook, if you’d care to see it. The mass emergence of Four-spotted Chasers is continuing at Lower Moor Farm: hundreds must have come out of the reed bed and dispersed across the area over the past few days, and I was able to get several reasonable photos of different individuals in various settings. The chap I’ve posted to Facebook settled on a stem in the middle of a bramble hedge, very close to where I photographed the Downy Emerald, and again allowed me several minutes to shoot it, first with the long lens and then – stretching carefully over the brambles – closer and closer in with the macro until the lens hood was almost touching the stem.

I spent a happy, if hot, couple of hours at the reserve, and when I left it wasn’t because I was bored, or thought that I had the best possible image of a Downy Emerald, or had given up hope of seeing a Hairy Dragonfly settle at a reasonable height from the ground. The problem was that I’d forgotten to apply my Avon Royal-Marines-approved-insect-repelling body spray this morning, and carnivorous flies with teeth like piranhas (I may have made that bit up) were taking lumps out of my arms and face – and it seemed to me that a liberal sprinkling of purulent lesions might not be the most attractive look for the Mother of the Bride to be sporting. In fact, the Mother of the Bridegroom suggested delicately to me last week, when I almost fell in the lake at Croome, that now might be a good time to stop playing silly buggers and sit down in a safe place until The Wedding – preferably swathed in bubble wrap. She’s very probably right, but, you know – dragons.

This evening R and I went to see the wonderfully weird Bells and Spells, which I recommend if you can catch the tour. It’s an amalgam of dance, mime, puppetry, magic and circus – slightly surreal, but charming and clever. It’s also quite short, which I approve of – I hate sitting down in a theatre and knowing that I’m about to lose three and a half hours of my life.