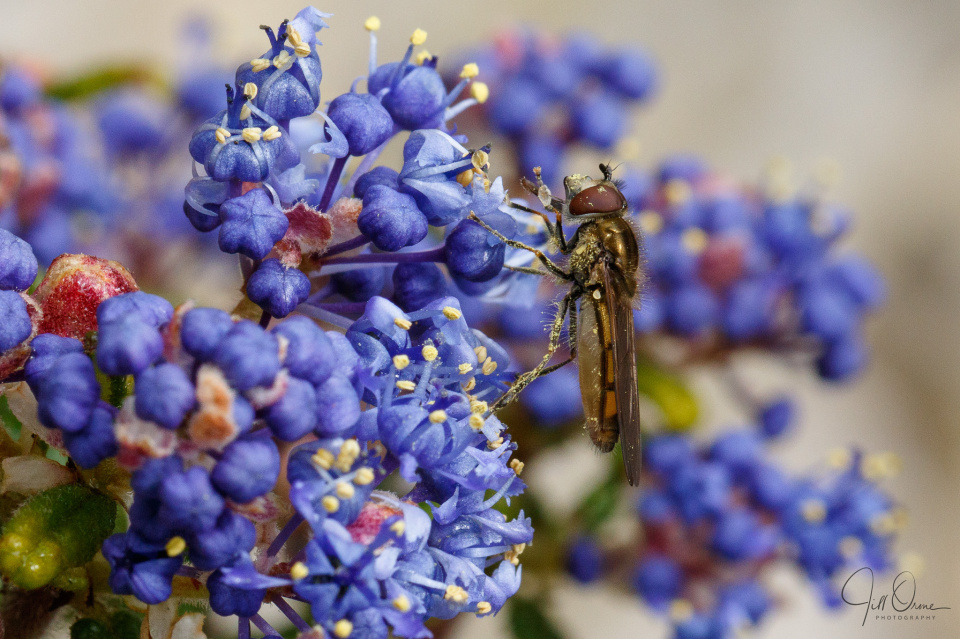 Three firsts for me today:

The first photo I’ve posted of the ceanothus R and I recently planted against the yard wall, and which is now coming into flower. A couple of ceanothus I’ve bought previously turned out to be disappointing when they flowered sparsely and in pale blue, so I’m happy to see that this one is producing lots of mid-blue flowers.  They look very different at close quarters to the impression they give from a distance, but that’s one of the joys of macro photography.

The first time I’ve ever recorded this particular species of hoverfly. I almost didn’t bother with it, because it wasn’t keen on me following it around and I could see that it was “only a Platycheirus”, but when I uploaded my photos and viewed them on a big screen I knew that I was about to get a new record for the garden, and was glad that I’d persevered. He’s a male Platycheirus tarsalis, which is a woodland species that’s mainly found feeding from plants such as garlic mustard and cuckoo flower, and which is most abundant in the English Midlands and the Welsh Marches. This is one of three Platycheirus species that all have prominent “noses”, but the only one of the three whose forefeet look exactly like this. It was kind of him to clean his proboscis at the precise moment when I took this photo, because it provided a perfect view of his left front foot and allowed the experts at UK Hoverflies to identify him unequivocally.

Apart from the excitement of running a tiny hoverfly to ground, the most interesting thing that happened today was also the most stressful: hearing an unexpected noise from the kitchen this morning when I was supposedly alone in the house, and fearing that we had an intruder, I marched into the room and found myself face to face with a terrified woodpigeon, which had flown in through the open back door and now couldn’t work out how to get back outside. It was crashing around, trying to beat its way out through the closed window of the snug, and jeopardising several treasured pieces of china that live on the windowsill, and every time I tried to shoo it in the right direction its hysteria level ratcheted up still further. As did mine. I phoned R, who was out walking at the time, but it turned out that he couldn’t resolve the issue remotely, so I just had to woman up and deal with it myself. On my third attempt I managed to get past the bird and unlock and open the window, and it hurled itself out through the aperture, leaving a trail of ordure – but luckily no broken china – behind it.