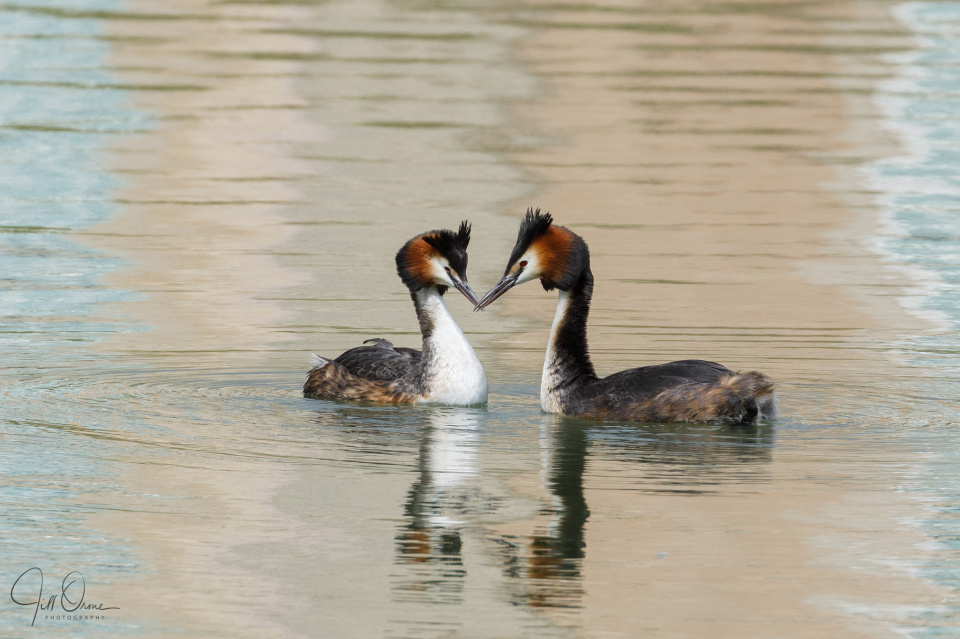 I’ve been so busy recently that seven weeks have somehow slipped past since my last visit to Compton Verney, but I managed to remedy that situation this morning, and spent three happy hours at the lake. Few things unscramble my brain and settle my emotions more effectively than spending time watching wild creatures, and today by that measure was a very good day indeed.

The most important thing I have to tell you is that since I last saw him, Mr Lonely has found himself a mate! None of the usual photographers were around this morning, so I couldn’t get the local gossip on the affair, but I hope to hear more in due course about when she appeared, and how he enticed her to stay.

I spotted him almost as soon as I arrived at the bridge, but I had so little expectation of seeing a pair of grebes in the northern territory by this stage that I wasn’t looking out for a second bird. He was hunting just outside the reed bed, and I was walking along the bank, keeping parallel with him and taking photos, when a movement in my peripheral vision made me look down, and I discovered that I was right above a female which was sitting on the nest platform I’d watched him constructing two months ago. She was staring at me with extreme disfavour, as well she might given that she appeared to be brooding, and I hastily backed away. It’s illegal – as well as being a horrible thing to do – to disturb a nesting bird, and I was annoyed with myself for not considering the possibility of the platform being occupied, but she didn’t move, and as the area is heavily used by dog walkers I assume that she’s become used to nearby human traffic. I won’t post any photos of the platform now that it’s become a nest, but I’ve added one of my images of the male below. Is it just me, or is he looking a little…. smug?! 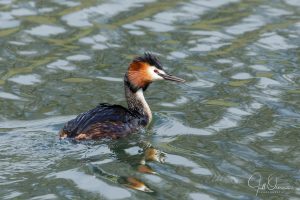 After all this excitement I went over to the other side of the estate to look for the grebes that occupy the southern territory, and very quickly found them doing synchronised snoozing in the middle of the lake. After I’d watched for maybe ten minutes, they woke up, chuckled at each other for a few seconds, admired each other’s hair-dos, and then tucked their heads into their breasts and went back to sleep. I carried on watching, and a few minutes later the performance was repeated – and continued to be, for the next two hours. They’re clearly a well bonded pair, and they have raised young in the past, but they don’t seem to be in any hurry to nest this year, and given that I don’t know how old they are I find myself wondering if their breeding days might now be over. Great crested grebes are mysterious creatures though, and it’s entirely possible that on my next visit I’ll find that they’re also incubating a clutch of eggs.

Whatever this season eventually brings them, it was a pleasure to watch their bonding rituals today, and I was especially happy when they drifted into this lovely patch of light. The colours on the water are reflections of the house: the buff colour comes from the stone, and the streaks of pale blue and white come from the deep Georgian windows with their grey-blue blinds.