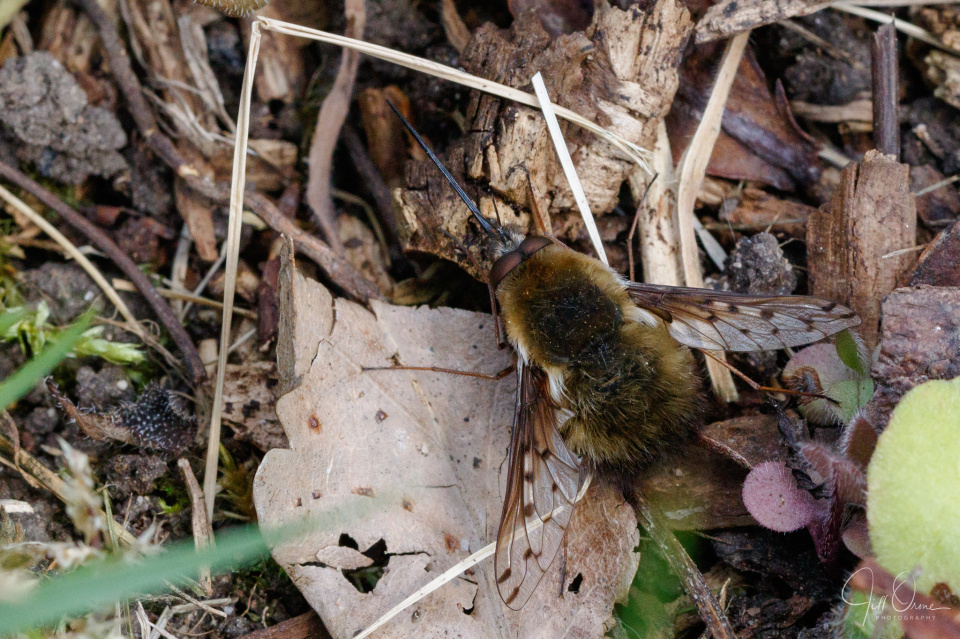 I’ve seen several Dotted Bee-flies in my garden this year, including at least one female. This is nice because they’re said to be less common than the almost ubiquitous Dark-edged Bee-fly, but in my experience they’re much harder to catch up with and photograph, which causes me to wonder whether they’re not so much rare as under-reported. They’re fast and skittish, and zoom away if I move towards them with any obvious intent, so I end up having to approach them in a roundabout way, pretending that I’m looking at something else. I’ve also seen them being chased out of the garden on a couple of occasions by female Hairy-footed Flower Bees, which hasn’t exactly helped me to secure my records.

Being a nature photographer, and therefore by definition never satisfied*, I’ve been striving to capture an image of one of these flies that wasn’t merely an acceptable record, but which showed the wing markings really well. They make this difficult by keeping their wings moving almost all the time, even when they’re feeding – though, on the plus side, this does make them easier to track down again after they’ve taken offence at you and made the leap into hyperspace, because their wings make a distinctive high-pitched droning sound that’s fairly easy to pick out amid the general noise of the garden, once you’ve tuned your ear to it.

Anyway, today I happened to be standing nearby, pretending to be doing something unrelated to insects, when this male decided to spend a few minutes resting in the flower bed, and by moving very slowly I was able to get quite close without putting him to flight. It would have been nice if he’d chosen a spot with less unphotogenic debris and more light (see above *), but at least I’m one step closer than usual here to the image I want. And I hope you’ll agree that he’s a rather handsome fly, with his dapperly spotty wings, and worth all the shenanigans that were required to get the photo.