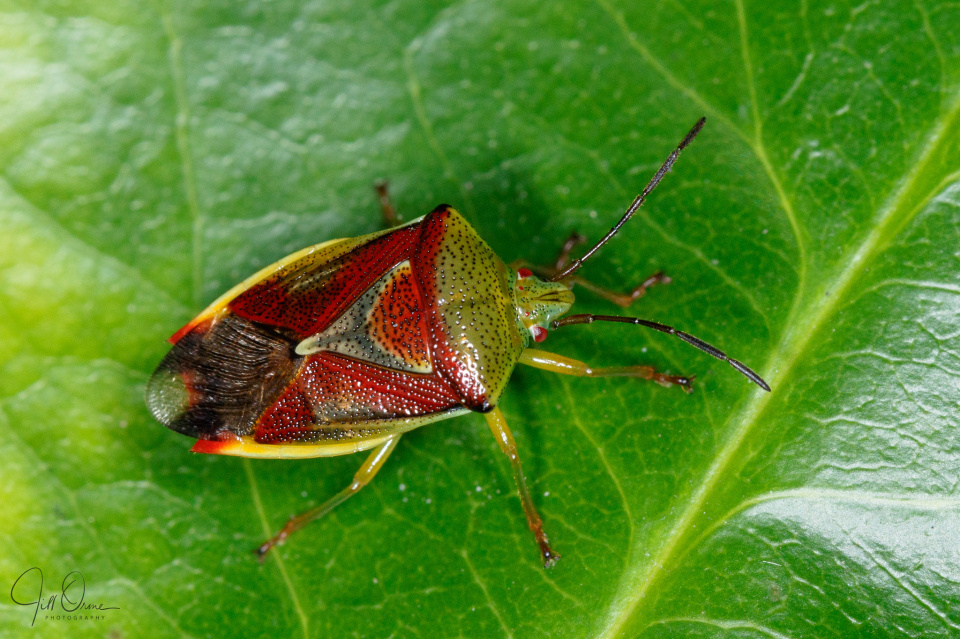 After several minutes of careful consideration, I have decided that this – almost entirely definitely – is a birch shieldbug. There is a very similar species, commonly called the hawthorn shieldbug, and I have mixed them up in the past, but that one is longer and proportionately thinner, it has more protuberant ‘shoulders’, and its ‘shield’ is completely green (except when the entire beast goes a confusingly rosy red, which it sometimes does over the winter). The only thing that makes me at all hesitant on the identification here is the fact that several web sites (copying each other’s homework, I think) state that in a birch shieldbug the lateral extensions of the pronotum (that is, the knobbly ‘shoulders’) are never tipped with red, and one goes onto assert that the tip of its abdomen is never red either.

Hmmm. Never is a strong word. I’m sticking with my belief: this is a birch shieldbug. You’ll have observed that it isn’t sitting on a birch leaf – I actually found it on one of the photinias in the garden, which it seems to favour, perhaps for reasons of camouflage – but there are two birch trees very close by. We also have a number of hazel trees in the area, which are the other favoured larval foodplant of this species. This young adult will shortly go into hibernation, and if it survives the winter will emerge and breed next spring. It won’t therefore be around at Christmas, which is rather a shame because I think its colouring is pretty festive. 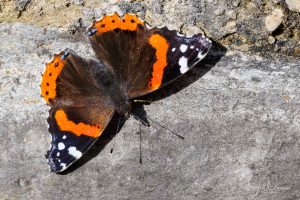 Also preparing to try to hibernate is this Red Admiral, which was one of four I saw at the north end of the village this afternoon; three of them were feeding up on the ivy flowers in the hedgerow, while this one was warming itself on a sunny garden wall. This butterfly is now considered to be a breeding resident in the warmer southern regions of the UK, but most of the ones we see here in early summer are migrants from the continent, and those appearing from late summer through into the autumn are their offspring. This new generation will attempt to hibernate, but sadly the majority of them won’t survive our winter.