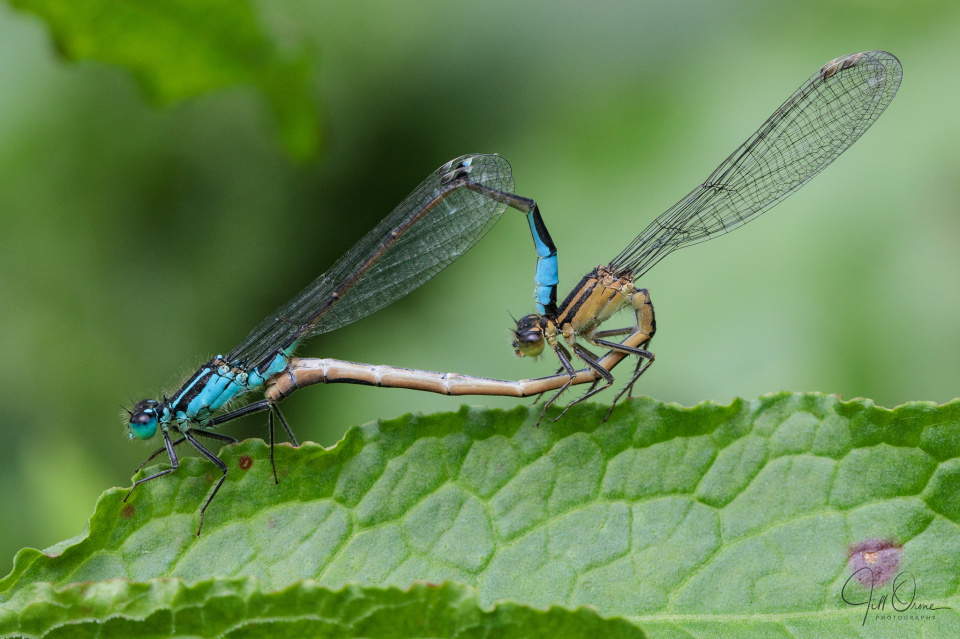 When I woke up this morning I pondered for a couple of seconds, worked out that it was Tuesday, checked the light, decided it was unphotogenic, heaved a sigh of relief, turned over, and prepared to go back to sleep. I was smugly thinking how nice it is to be retired, when I suddenly remembered that I had an early appointment for a haircut in Chipping Norton, and realised that if I didn’t put on a turn of speed I was likely to be late. And thus ended my lazy lie-in.

By the time I was shorn and ready to go on a bug hunt the weather over in Oxfordshire was still unpromising, and a quick phone call home established that it was no better back in the Shire, so I decided to drive through to Stratford, which turned out to be brighter and warmer. After running some errands in town I popped down to the river, and managed to find a few nice invertebrates, of which this pair of Blue-tailed Damselflies were my favourites.

Blue-tails are interesting damselflies. They look rather fragile, especially the males which are noticeably slender, but their hunting and breeding activity is less likely to be limited by poor weather than that of other species, and they’re more likely to wander from their natal waters, often being the first to colonise new sites. They mature quickly, going from emergence to sexual maturity in just a few days, and they’re more likely than other damselflies to stay close to their eventual breeding sites while they’re maturing. Copulation lasts anywhere from three to six hours, after which the female oviposits alone, often in the evening after the males have gone to roost.

Blue-tails appear in a variety of colour forms, which change as each individual matures, and this can be confusing, so I tend to check for the two-tone wing spot, which is always present though it’s more strongly defined in males than in females. Immature males tend to be black and green, changing quite rapidly to the black and blue you see here. Viewed from the side there’s plenty of blue, but seen from above the impression they give is that they’re mostly black, with narrow blue shoulder stripes and a blue band across the S8 segment of the abdomen.

One female colourway begins as what’s called the rufescens form, which has a bright pink thorax, with the shoulder stripes so broad as to almost merge with the colour on the sides, and a blue S8 band. As a rufescens female matures, her pink and blue both turn dull brown, at which point she’s termed rufescens-obsoleta. The other immature form, called violacea, has normally-spaced shoulder stripes, which together with the sides of the thorax and the S8 band are a rich violet colour. She matures either to the typica form, whose colouring is essentially the same as a male’s, or to infuscans, which passes through green and then olive, and eventually also becomes brown. This female will have started out as violacea (my favourite form), and she’s now infuscans.

I hope you’ve been taking notes, because I’ll be setting a test on Friday.