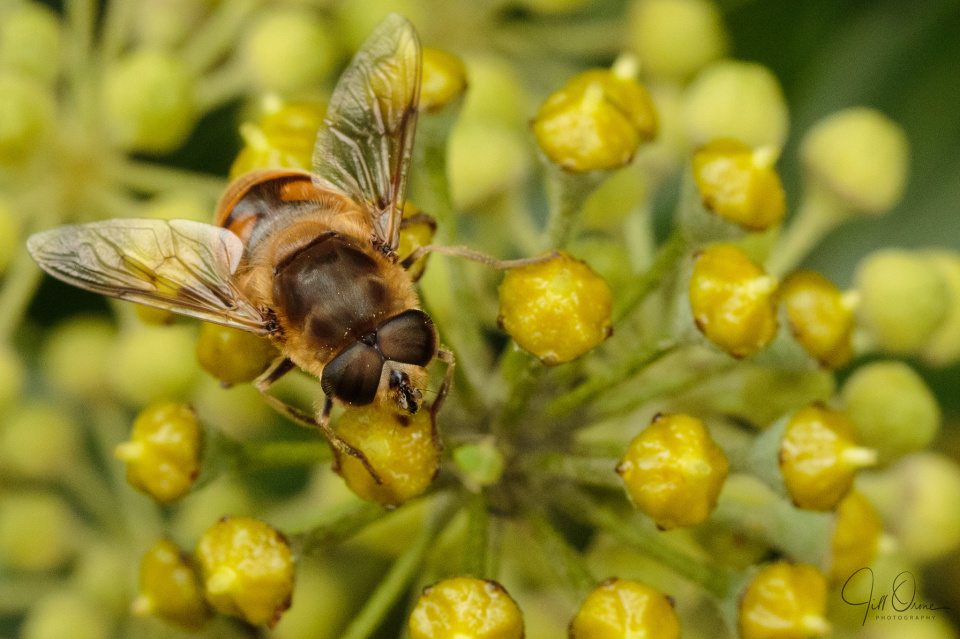 R’s favourite photo of the day is one I took of a female tufted duck at the river in Stratford today, but it’s only a few days since I blipped a tuftie, and I don’t want to try your patience – it could be a long, duck-filled winter. I did note that there were five of them outside the theatre this morning, which is pleasing; and also that they were mixing to a surprising extent with the other waterfowl – I even saw one dive for some grain that was thrown from the bank, which I’ve never seen happen before.

Back at home after running our errands, I went for a walk with the macro, but the light was dire and it was quite chilly, which seemed to be keeping most of the insects at home: even this stand of luxuriantly flowering ivy had only a few honey bees, wasps, and hoverflies on it. I was amused by this hoverfly, who kept presenting himself to the camera as I moved along the ivy, as if he wanted to have his portrait taken – I was able to tell that it was the same fly by the pattern of pollen grains on his thorax.

My new small friend is an Eristalis tenax, identifiable by the double line of hairs along each eye, which you should be able to make out if you view this full-screen. This is one of the helpful species in which you can easily tell males from females by the fact that the eyes of the male meet in the middle of the head, whereas the eyes of the female are separated. E. tenax is a honey bee mimic, though not an especially good one, being bigger and fatter – but it does make a ferocious buzzing noise when it flies, which probably puts off some potential predators.