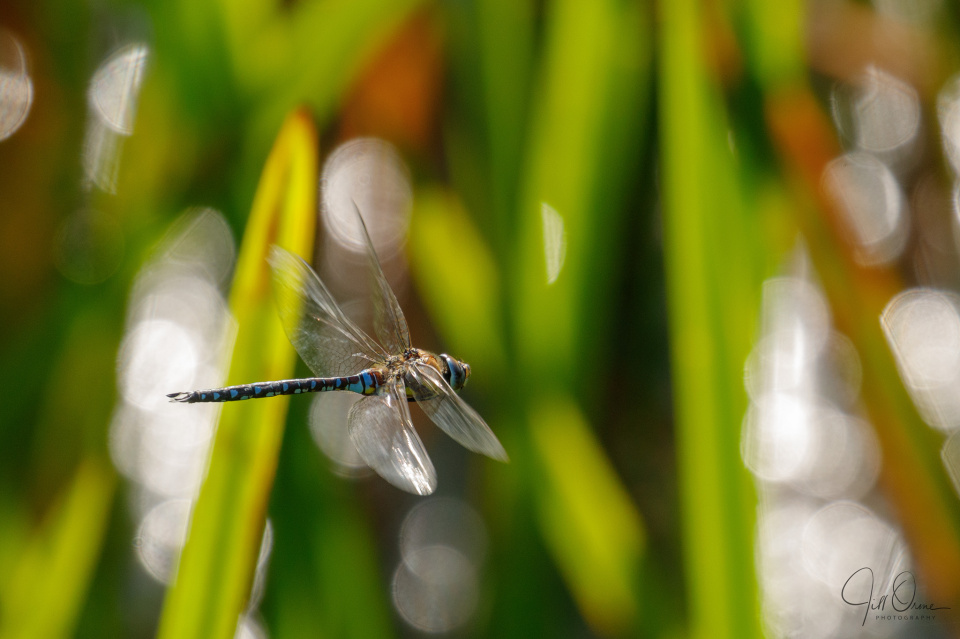 I haven’t seen a single dragon here since the cold snap earlier this week, although photos are still appearing on line from other parts of the country, and I was beginning to fear that in the Shire our season had come to an abrupt end. But after heavy overnight rain this morning was warm and sunny, so R and I went off to Croome for a walk, and as soon as we reached the lake we spotted some Migrant Hawkers, hunting and bickering.

The light was tricky, and I didn’t have my finest session with the camera, but when we were walking over one of the metal bridges and saw this chap hovering above the reed bed, I decided to embrace the crazy bokeh and go for the shot. The camera club judge that lives in my head is harrumphing about it, but I don’t care – this is what the morning was like; but in case it’s making you squint the way we were having to, I’ve also posted a shot of a resting specimen, taken from the other side of the channel with the light behind me. All the boys were clearly cold, and struggling to get moving: they were landing very frequently, and rapidly vibrating their wings to warm up the muscles before taking off again. 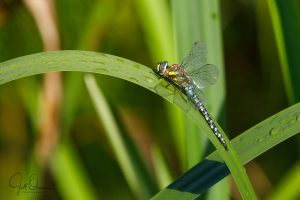 Back at home, while we were sitting in the conservatory having lunch, a sudden kerfuffle out in the garden alerted us to the arrival of a sparrowhawk. Having put up every bird and squirrel in the area, but missed catching any of them, he landed in the apple tree, where he skulked for a few seconds before flying away. A few minutes later he swooped in again, causing more excitement and alarm, but again he failed to kill, and sat looking rather disconsolate on the lawn for long enough for me to scoot upstairs for the camera – but he left just as I arrived back, so I didn’t get a photo. From the size and colouring he was definitely a male, and from the inefficiency I suspect he was a juvenile. I’m not keen on seeing my garden birds predated – not least because it feels as though by encouraging them into the garden with food I’m providing live bait – but everything has to eat, and I felt rather sorry that his efforts had cost him so much energy for no reward. I hope his hunting skills improve quickly enough for him to make it through his first winter.