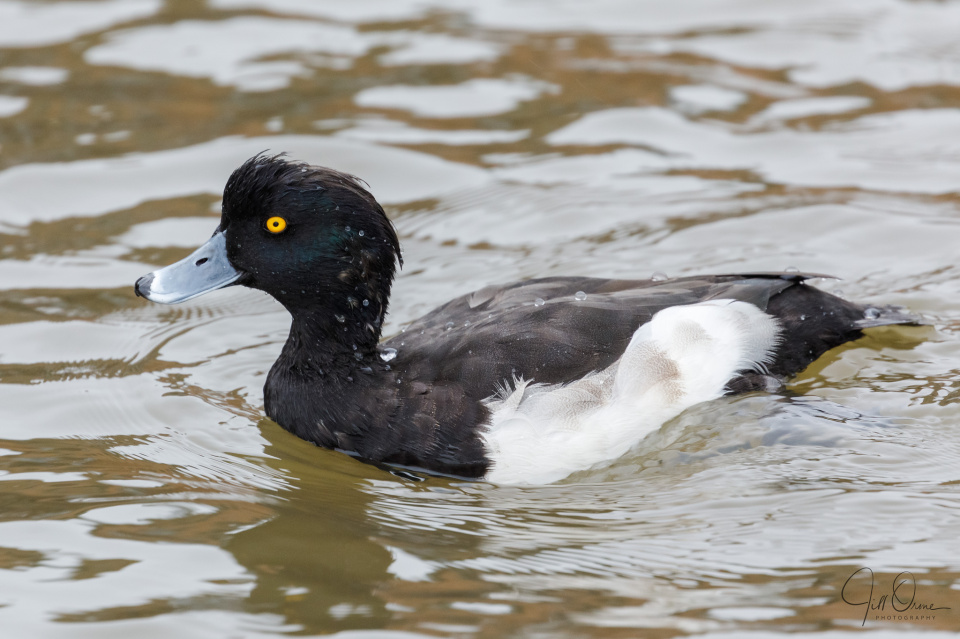 You know that thing I said about it being a long, duck-filled winter….? Ahem.

Today was utterly dreary – it never seemed to get properly light, and by the time R and I went into Stratford for errands and coffee, it was drizzling. Nevertheless, I did get a few photos that I quite like, including (surprisingly) one of a crow, which I may put on my photography page in the next few days. Today’s Facebook offering is another tufted duck, juggling a water snail he’d just brought to the surface – molluscs being a favourite food of these little diving ducks. He then swallowed it whole, which I guess must mean that it was destined to be ground to a pulp in his gizzard; you’d think that this would be uncomfortable for the duck, as well as the snail, but maybe, like grebes, tufted ducks swallow soft material specifically to protect the gizzard lining.

The light was so bad at the river that I spent a while embracing it, and taking slow shutter speed photos of a black-headed gull feeding frenzy. This was quite hard on my shutter count, because I was looking for shots in which the people on the bank, plus the swans and ducks, were reasonably still and sharp, and only the gulls were in obvious motion, and clearly the whole thing was a bit hit-and-miss. But I did end up with a couple of keepers, and it’s something I may try again in the future.

In the end though, this is my favourite photo of the day – partly because it’s about the only one I took of the river in which the water is quite interesting, and not just a flat sludge brown; but mainly because I love the fact that this scruffy little duck is moulting into his proper plumage. His “bumper” is nearly white now, and that flash of green on his cheek is the harbinger of the iridescent purple and green head he’ll be sporting within a couple of weeks. What I’m going to need then is some low winter sunlight, to make his colours sing.