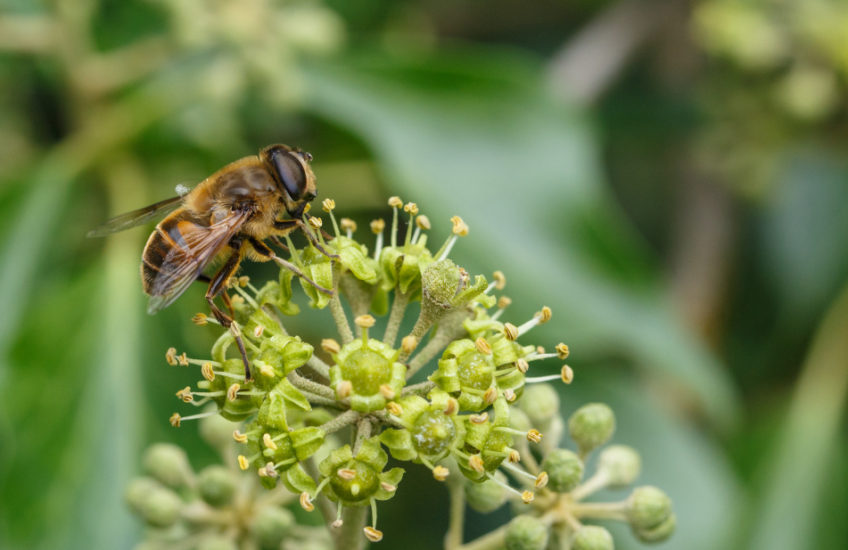 R and I went to my sister’s 50th birthday party yesterday evening – no, wait…. That can’t be right… She’s x years younger than me, so if she were 50, that would make me….. No, that’s definitely not right – I’ll have to phone her up and check, because I think she might have mistaken the date.

Anyway, it was a lovely party, even if she shouldn’t really have been claiming to be 50 – but we were back quite late and I was over-tired (which isn’t a euphemism, on this occasion), so every little noise woke me up all night, and this morning I could barely lift my head off the pillow. Which was a shame, because I was supposed to have been in Nottinghamshire for a photography thingy at 10am, and that’s more or less the time at which I surfaced. Not the best start to the day.

After grumping about the place all morning doing file back-ups and such, I took myself off out on a bug safari, hoping to find the rarish Colletes hederae bee on the ivy which is now flowering in the hedgerows around here. I didn’t find any, but there were plenty of other insects foraging on the ivy – notably a large number of these drone flies.

Eristalis tenax is very easy to mistake for a honey bee, being the same size and similar in appearance, and making a very similar buzzing noise as it flies. Once you have your eye in though, it’s quite easy to distinguish by the different shape of its eyes and antennae; and the fact that it moves in a very different way to a bee. There are several species of Eristalis hoverfly in this country, which can be difficult to separate – but the thing that always identifies E. tenax for me is that it has two distinctive lines of hair running across the surface of each of its compound eyes. If you look at the main shot full-screen you’ll easily see the posterior line, which runs vertically on the eye, and you should be able to make out the anterior line too, running away at an angle. Just to make it easier, I’ve put in an extra face-on shot which shows both lines more clearly. 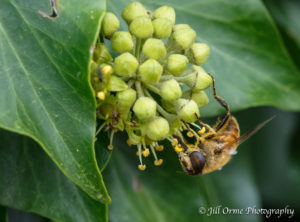 I hope you were taking notes – I’ll be setting a test on Thursday.