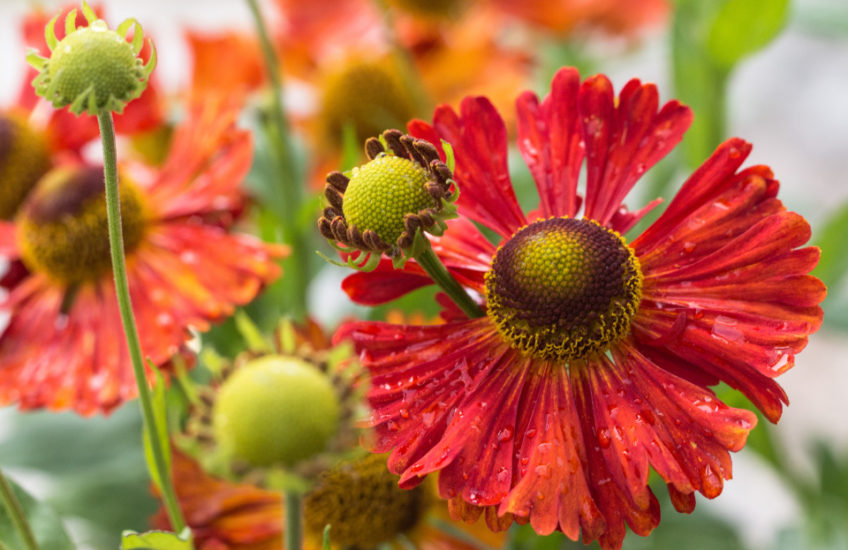 After last night’s rain it was dry and fairly bright first thing this morning; but by the time R and I took the dogs for a pack walk at about 11am the sky was starting to look threatening. We did half of the village and the butterfly field, and Arthur was keen to carry on further – but the sky was now eclipse-dark and R and I were equally keen not to get wet, so we turned for home.

You know those unlikely scenes in films where the heavens open and in seconds the characters are literally drenched to the skin? It was like that. We were still about 500m from home when the first drops came down, and within a few paces we all looked as though we’d just been fished out of the sea. There was absolutely nothing we could do to protect ourselves, and the situation seemed so bizarre that R and I just looked at each other and laughed. We must have presented quite a sight, squelching down the road with water running off us and all our clothes clinging and dripping, laughing as though we were somehow enjoying ourselves.

The dogs, on the other hand, were outraged – Arthur especially kept looking at me as though trying to work out what he was being punished for!

By the time we reached home we were all shivering, and R and I most definitely did not look like Hugh Grant and Andie McDowell. We had to peel off every stitch of clothing, which was a most unpleasant experience – rather like trying to shed a leaking rubber glove. Once we were dry and warm and I’d dried off the dogs, I took advantage of a lull in the monsoon and fetched in one of my new plants to be today’s photographic model.

This is a different helenium to the one I blipped a few days ago. Bob Brown of Cotswold Garden Flowers, who creates charmingly discursive plant labels, describes it thus:

HELENIUM ‘ROUGE FONCÉ’
Asteraceae
Sufficiently different to attract me – a full-petalled red-orange Jul-Sep, 60cm. Thierry (from whom I obtained it) thinks it may be misnamed.

When Bob says Thierry he’s referring to the great French plantsman Thierry Delabroye. But why does Thierry think it may be misnamed? Did he make up the name because he doesn’t know what it is? “Rouge foncé” simply means “dark red”. The RHS web site lists only CGF as suppliers of the plant, and says that this is a “tentatively accepted” name, and a Google search reveals no other mentions of it. No large collections even list it.

So it’s a bit of a mystery – but then, we all like a little mystery in our lives! I think it’s charming, and I chose this shot because it illustrates the development of the flower from a lime green disk through to a yellow disk with the rays that will turn into petals; and finally the open flower with its cone florets maturing from yellow to brown, before opening to reveal their yellow stigmas.

I’m quite excited about this new batch of plants, and looking forward to finding homes for them when the weather and my cold both improve. In the meanwhile, they’ve already repaid me for buying them by providing me with several blips – and there may yet be more to come in the next few days as I work through more of the flower photography course.

Before I sign off I’d like to thank everyone who responded so kindly to yesterday’s little butterfly. I was pleased with that shot myself, so it was very gratifying to receive so many nice comments, stars and hearts on it.