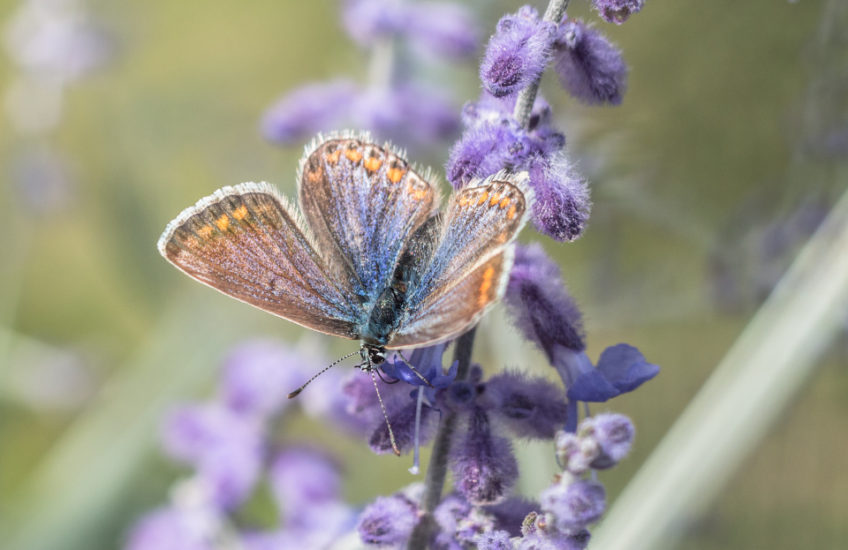 Although it was only about 23° this morning, the humidity was up near 80%, and the overall effect was sweltering. I’m aware of course that this is as nothing to many of you in the less temperate bits of the planet, but to a pale English rose who wilts in the heat, it’s staying inside with the blinds down weather.

So I did four hours of heavy gardening.

Last summer I planted a Persicaria amplexicaulis ‘JS Caliente’ – it was about 30cm tall, with a 20cm spread, and it looked reasonably good on the lawn edge of the pear tree bed with some other, similar-sized perennials. Unfortunately it survived and thrived, and by this week it had reached about a metre in height and spread and was attracting every wasp in the village – and every other plant in its vicinity was looking terminally depressed. So I decided a few days ago that today was going to be its moving day, and despite the heat I thought I’d better get on with it because heavy rain was forecast.

I began by declaring war on a large patch of self-sown aquilegia in an awkward corner of the front garden: they put up a fight, but I won in the end and cleared a good-sized space. Then I tried to dig up the persicaria – initially with a garden fork so as not to damage it, but it simply scoffed at my efforts. In the end I managed to get a spade under it, and applied leverage with my left hand while hauling on the top growth with my right, until eventually the roots started to give. (My left shoulder gave at around the same time, but I’m sure it will recover.)

Having lifted the clump and split it with a lawn edger (the only blade that would penetrate the root ball) I replanted the two sections – one in the dismal corner of the front garden that I’d cleared earlier, and the other higher up and further back in the pear tree bed. Neither piece looked especially thrilled with the change in its circumstances, but I staked and tied them, watered them well, gave them some Rootgrow and told them to man up. I think they’ll probably both be OK – I’m more concerned about the vengeance they might decide to wreak when they get their strength back.

I’d just finished planting the second section and was starting to think about a final tidy-up before going inside, when a small fluttery movement caught my eye, and I found myself stalking a tiny butterfly until it came to rest on a spike of perovskia. I could see that it was a female blue (i.e., largely brown), but I didn’t have my glasses on and its closed wings were no bigger than my thumb nail, so I couldn’t identify it.

I grabbed the camera from the kitchen, cursing the fact that it had the 50mm lens and 12mm tube on it and certain that the butterfly wouldn’t let me get as close as that combination requires, but she did. It turned out that she was only a Common Blue, but I’m still surprised at just how small she was. I took over a hundred shots of her across maybe quarter of an hour – every now and then I would disturb her, but she’d just circle my head and come back down on another flower. She was more worried about the honey bees which kept landing right by her, and looked almost to be shouldering her out of the way – but even they didn’t deter her from her meal. As soon as I was confident that I had a decent range of shots, I left her to it.

R had told me earlier that I was the colour of raspberry ice cream – a statement which raised such an unappealing mental image that I’d avoided going to check whether he was telling the truth. But I think he probably was, because as I walked past the landing mirror on my way to the shower I noted that I was now the colour of tomato soup. That was about eight hours ago, and I’m only a few shades closer to a normal colour even now, so I think I have to assume that I’ve taken a touch too much sun. It would be quite tempting to go and stand out in the rain that’s now lashing down, but bizarrely, I’ve suddenly gone down with a streaming cold.

I think I shall take my Kindle and retire to bed, and try to catch up with you good people tomorrow.

Oh, by the way – R chose this shot of the Common Blue because it shows the range of colours in her wings. But there were several other images that we both liked nearly as much, so I’ve put them up on Flickr.