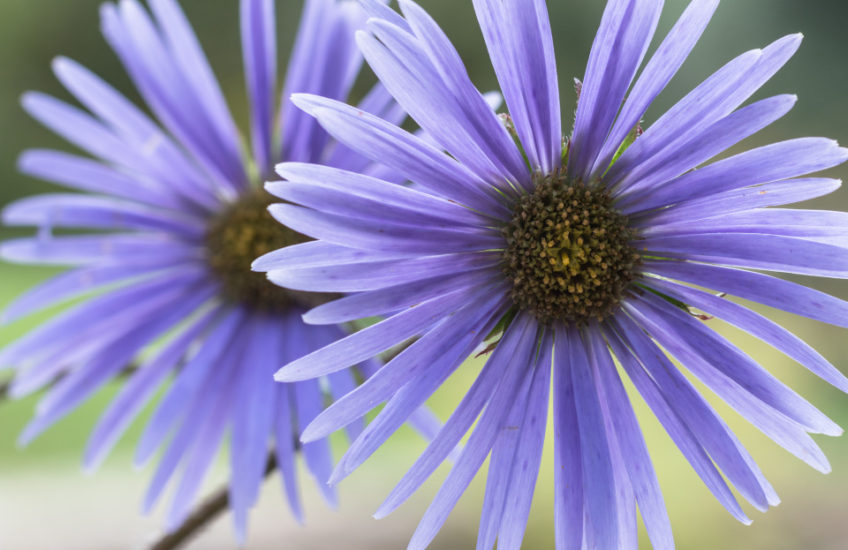 I had to take Roley to the vet first thing this morning for his annual check-up and vaccinations (the good news being that there’s nothing wrong with him that losing some weight wouldn’t correct), after which I took both dogs for their walk. I was hoping to see some interesting insects in the butterfly field, but there was nothing much around – it was warm, overcast and humid, but there was a surprisingly strong southerly wind blowing and I guess the conditions weren’t favourable for anything other than bees, which were working away as usual.

Deprived of a photo opportunity there, I remembered Flower Friday and decided that as a change from the warm colours of the past three blips I would photograph the Aster peduncularis I bought the other day. It was clearly too windy to do it outside, so I went to fetch it in and discovered that a branched stem had bent right over and was partially broken – which seemed a good reason to cut it off and put it in water.

Because Kathleen Clemons’ course is still very much in the front of my mind, I did a quick experiment with this very simple pair of blooms: I photographed them at f/2, f/2.8, f/4, f/5.6, f/8 and f/11 with the 50mm lens, the 50 plus a 12mm tube, the 85mm lens, the 85 plus the 12mm tube, and finally the 85 with a 21mm tube. Each time I worked at or close to the minimum focusing distance. I did a very quick edit on all the shots – lens correction, clarity and removal of any clipping – and made a collage for each of the lens combinations, which I’ve kept for reference.

I then went through the shots one by one and selected the ones that most pleased my eye for keeping. While I was re-editing them I noticed that the most accurate colour reproduction in the whole exercise had come from my little old plastic 50mm – a lens I tend to discount these days, but which I think I should probably use more often. Having said which, this shot was taken with the 85 and the 21mm tube.